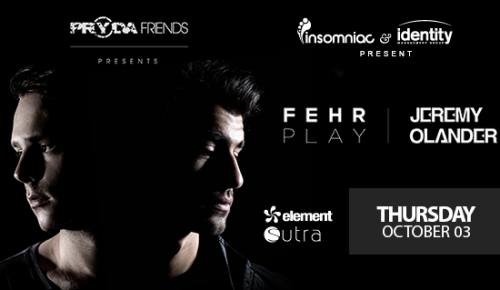 What: Element with Pryda Friends at Sutra

Meet two fresh producers/DJs that have only scratched the surface of a monstrous career: Fehrplay and Jeremy Olander signed to the Pryda Friends label in 2012 and 2011, respectively. Fehrplay brings a sophisticates funk along with his trademark, epic cinematic film score-esque breakdowns, while Jeremy Olander makes major waves with his eclectic and emotionally charged progressive style. The Pryda Friends North American Tour are ready to create your night on October 3rd!
About | Advertise | Contact | FAQs | Terms of Use | Privacy Policy | Accessibility Policy © 2021 - TheUntz.com. All rights reserved.