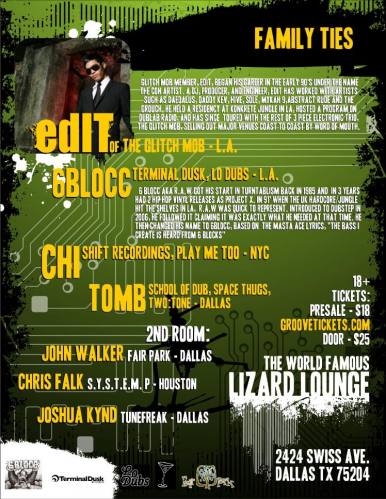 What: edIT of The Glitch Mob @ Lizard Lounge


edIT
Glitch Mob member,ediT, began his career in the early 90's under the name
The Con Artist. A Dj, producer, and engineer, ediT has worked with artists such
as Daedalus, Dilla,Daddy Kev, Hive, Sole,Mykah 9,Abstract Rude and The Grouch.He held
a residency at Konkrete Jungle in LA, hosted a program on Dublab radio, and has
since  toured with the rest of 3 piece electronic trio, The Glitch Mob,
selling out major venues coast to coast by word of mouth.

6Blocc
6 Blocc aka R.A.W got his start in turntablism back in 1985 and  in 3 years had 2 hip hop
vinyl releases as Project X. In 91' when the UK hardcore/jungle hit the shelves in LA,
R.A.W was quick to represent. Introduced to Dubstep in 2006, he followed it claiming
it was exactly what he needed at that time. He then changed his name to 6Blocc, based on
the Masta Ace lyrics, "the bass I create is heard from 6 blocks"