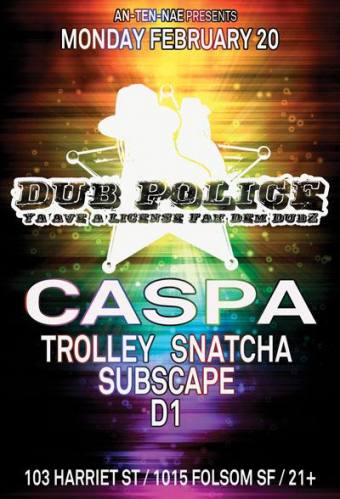 Caspa grew up in West London, and was brought up on a diet of jungle & hiphop. At the time he wasn’t old enough to go to the jungle raves so had to be content with his tape packs of Brockie and Det. When garage emerged he naturally progressed into the sound and started attending garage raves.

After a number of highly successful releases and remixes, in October 2007, Caspa along with label artist Rusko, were appraoched by Fabric and asked to mix the 37th installment of the legendary FabricLive series, following on from estalished artists like John Peel, Fabio & Grooverider and DJ Craze. This was the first commercially available dubstep compilation and majorly helped bring the genre into the limelight, and for many listeners, it was the first time they were exposed to the music.

In 2008, Caspa joined highly respected artist agency ‘Coda’, this lead to a string of high profile gigs & festival performances such as Glastonbury, Global Gathering, Big Chill and Glade aswell as taking Caspa as far and wide as Israel, New Zealand, America, Canada and all across Europe and the UK.

Caspa’s recently started sister label to Dub Police; ‘Sub Soldiers’, was now thriving with two installments of the popular ‘Ave It’ series, amongst other huge tracks to come out of the label. It was also at this time that Caspa & Rusko were approached by Lennie De Ice to remix the foundation setting Jungle anthem ‘We I.E.’ which had been one of Caspa’s all time favourite dance tracks. Straight after, Caspa’s highly successful remix of TC’s drum and bass anthem ‘Where’s My Money’ had become one of the biggest dance tracks globally and had grown into one of the biggest crossover tracks of 2008, propelling dubstep to the mas

Trolley Snatcha is the stage name of the English dubstep record producer and DJ, Zack Kemp. formerly a drum and bass producer under a list of alias'. He has performed alongside a number of high profile artists spanning a range of musical genres. Trolley Snatcha is signed exclusively to and releases his records through Dub Police Records, a label which was created and owned by dubstep legend caspa. Although only makin his first movements within the dubstep scene in 2008 he has been writing & producing a music for years.

Subscape is a man whose star is most definitely in the ascendant. His unquestionable talents as both a DJ and a producer quickly got him noticed and have continued to be the driving force behind his fast rise to prominence. Since gaining his debut release on the prestigious Dub Police label in 2008 he has barely stopped to take a breath, unleashing a slew of impressive tracks, touring across the world and receiving support from the likes of Annie Mac, Rusko and Scratch Perverts to name a few. Born and raised in Woking, Surrey, Subscape grew up on a diet of drum and bass, jungle and garage. This was a musical education that helped him quickly develop a well-trained ear for bass heavy music and would eventually lead him to the exciting take on the dubstep sound that he creates today.

Dwayne Marsh AKA multi-instrumentalist DJ and producer D1 has music coursing through his blood. From an early age he was absorbing the sounds of underground music and soundsystem culture around the house from his parents, his father being a jungle producer himself.

Drawing upon the whole of the UK's vast underground musical heritage, Marsh melds together a diverse array of influences into his sound, deconstructing UKG, Funky, jungle and dubstep and rebuilding them into his own unique sound. After several successful years at Tempa, D1 signed to Caspa's Dub Police label in 2008, and hasn't looked back since. With a number of releases already under his belt for the label, Marsh has big plans for the new year. Eager to get as much music out this year as possible and showcase his adroit skills on the decks to audiences everywhere, you can be sure that you will be hearing a lot more from D1 over the coming months.

With plenty still up his sleeve, the sky is the limit for Marsh and his unique take on the sounds of the UK underground.