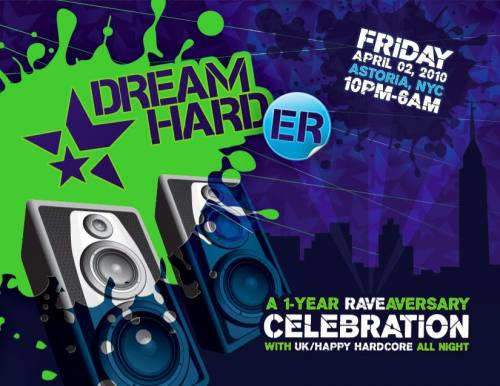 In March 2009, we started DreamHard to bring a fresh new era of hardcore raves to NYC. Since then we have delivered some absolutely stellar events including two international headliners, and some of the greatest DJs the Northeast has to offer! This time we're bringing you one of the dopest up-and-coming hardcore producers, all the way from the left coast, along side a new resident DJ. On April 2, 2010 we invite you to join us as we celebrate our one year RAVEAVERSARY. In 2010 let's DreamHardER!
Friday April 02, 2009
10PM - 6AM
Tony Benino
(K12 Studios, Raw Elements - San Francisco, CA) *90 MINUTE SET*
Tony Benino of K12 Studios is known for his epic productions and ballistic DJ talent. Working with artists such as Reese & No Left Turn, Tony brings the best in American hardcore to the party. Known for his unique style of hardcore, Tony's tracks such as "Got The Place Rockin" and "The End" have topped numerous DJ's charts in the past year. Flying in directly from San Francisco, Tony is guaranteed to please any crowd. Buckle up and hold tight, this one's gonna rock the party all night.
DJ Candy Kid & Starkiss
(Vitus, Ravers Only - NYC // Good Vibes, Ravers Only - PA) *90 MINUTE SET*
Coming on strong with the hardcore power, the DreamHard Crew bring you their first back-to-back (B2B) special guest, DJ Candy Kid & Starkiss! One of the northeast's most popular tag-teams will be ripping up the room for the April installment of DreamHard. Both spinning under the Ravers Only banner you know these two will bring the noise! With Candy Kid's unique style and adrenaline packed mixes & Starkiss with his super fresh beats and squeaky clean mixing this will definitely be a night you will never forget. We are proud to bring them to you for their first DreamHard performance!
Keither
(Tight Crew, kraftyradio.com - RI)
Keither has been rocking the decks for a few years now and has built a strong following within the hardcore community, establishing himself as one of the most energetic happy hardcore dj's in the northeast. Known for his late night sets, Keither can keep the crowd wanting more till the very end. Keither is also co-founder of Tight Crew.
Mark5
(Hard Hitters, kraftyradio.com, happyhardcore.com, www.mark5.us - MA)
mark5 has been blazing dance floors alight across the northeast for the past six years with his blend of bold mixing and scratchisms. He packs his arsenal with crowd-pleasers, exclusive unreleased tracks, energetic bangers, and hits from the earlier days of hardcore. Recently, he has been able to assault the airwaves through weekly shows on both kraftyradio.com and happyhardcore.com in addition to founding the Hard Hitters crew, which hosts New England's hardcore monthly event: Hard Hits. He plans to continue his attacks in Queens on this night and you should expect nothing less than a hardcore bombardment of excitement, energy, and pure badass bliss.
Leela
(DreamHard, evilOlive, k00t3rk0r3 - NYC)
Leela has been known to mash up dancefloors with a super-awesome blend of all things hardcore with a touch of dnb. If you've heard any of her mixes, then you know what is in store; fast, bouncy, cheesy, freeformy, and breakbeaty goodness. Since 2003, Leela has been on a personal mission to seek out the best of the best in hardcore, no matter what the flavor. Having performed at events in New York, New England, Philly, Baltimore, Toronto, and San Francisco, alongside some of the most creative DJs in hardcore, Leela is always ready to step up to the decks.
Flyin Brian
(DreamHard, WTNRradio.com - NYC)
This DJ has been rocking the decks for over 8 years thrilling dance floors large and small with high energy track selections, furious cuts, epic speed mixing, and tons of free smiles! With his ferociously driving mix of UK Hardcore, Freeform Hardcore, and Drum n Bass this DJ guarantees to keep you stomping till the break of dawn! Flyin Brian hosts a monthly internet radio show, Hardcore Vibes, which is now in it's fifth successful season on WTNRradio.com. You can catch him on the air on the last Saturday of every month from 10pm- 6am. As one of the founders of NYC's DreamHard Productions, Brian and the entire DreamHard crew are dedicated to keeping the hardcore vibe alive in NYC!
Auratika
(DreamHard - NYC) *OUR NEWEST RESIDENT DJ*
New York native Auratika started listening to hardcore at a young age and quickly picked up the art of DJing soon after. Since then, he's developed his unique blend of sound that can be easily distinguished by ravers all around. If you heard any of his Auratikore or CandyCore mixes, then you know you're always in for a treat. He's been rocking crowds in New England, New York, Baltimore, and more with his ultra fast, super cheeezy hardcore style and high energy track selections, topped off with a little bit of quirk that's sure to keep you jumpin' all night long.
-------------------------------------------------------
LA OVEJA NEGRA
34-38 38th St, Fourth Floor
(between 34th + 35th Ave)
Astoria, NY 11101
NYC Subway: (G) ® (V) to STEINWAY
18+ to dance, 21+ to hit the floor
$15 @ the door
About | Advertise | Contact | FAQs | Terms of Use | Privacy Policy | Accessibility Policy © 2022 - TheUntz.com. All rights reserved.