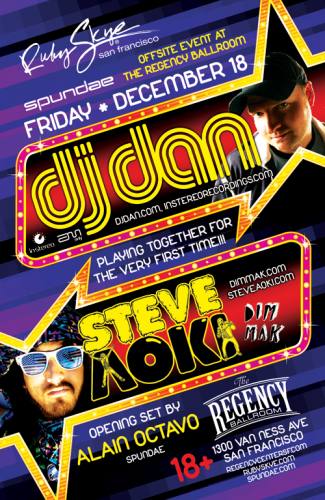 What: DJ DAN & STEVE AOKI: AT THE REGENCY BALLROOM

DJ DAN
DJ Dan began spinning in L.A.'s early '90s rave scene and then became the main DJ for San Francisco's aptly-named Funky Techno Tribe. Along with headlining raves in the US and worldwide, DJ Dan has remixed popular dance artists such as Cirrus and released albums and singles on labels such as Ultimatum, Kinetic and Moonshine, including 1998's Beats 4 Freaks, 1999's Funk The System and 2000's Put That Record Back On.
DJ Dan was raised in Seattle and eventually settled in Pasadena and San Francisco, California. Living in California exposed Dan to different kinds of music; such as high energy and hip-hop and rap from Los Angeles and disco and house from San Francisco. Originally a fashion design major, Dan put design on hold when he decided that music was his true calling. In 1996 Dan released his first mix CD, Loose Caboose. After building a DJ career locally, Dan started building a production career. The production aspect took off for Dan when he did a remix for Orgy's cover of "Blue Monday." In 1998 he released the mix CD, Beats 4 Freaks on Moonshine. Dan put himself on the club hit map with the release of "That Zipper Track" and "Needle Damage" in 1999. The tracks exploded onto the club circuit and were further impacted with the release of remixes by Terry Mullan and the mix CD, Funk the System. The popularity of the releases earned him a slot on a world wide tour with fellow label artist Carl Coxand producing remixes for other Moonshine artists like Cirrus. Another Late Night along with the single Put That Record Back On followed in 2000, speeding along Dan's career
STEVE AOKI
The man behind Dim Mak Records who founded and released artists from Bloc Party, The Kills, Klaxons, MSTRKRFT, The Bloody Beetroots, Mystery Jets, The Rakes, The Gossip, Envy, also is the same man behind the production moniker Weird Science that has remixed Peaches, Snoop Dogg & Bloc Party. Under his own name, Aoki has remixed The Killers, Robin Thicke, Lenny Kravitz, Duran Duran and Timbaland, Chester French, S.P.A., All American Rejects, Chris Cornell & more. In the past he has collaborated w/artists from Boys Noize, The Faint, D.i.M., The Bloody Beetroots, & Junkie Xl. Also involved in fashion, Aoki has developed lines for KR3W Apparel, Supra Footwear, headphones for WESC, and in ‘09 sunglasses with KSUBI, headwear with NEFF, bags with Burton, & a brand new mens/women’s range with his sister Devon.