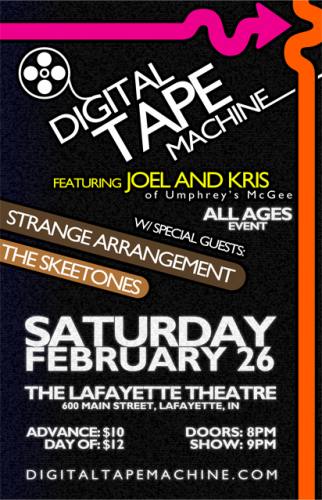 What: Digital Tape Machine with Strange Arrangement and Skeetones

Digital Tape Machine featuring Joel and Kris from Umphrey's McGee comes to Lafayette, IN on February 26,2011. Special guests Strange Arrangement and The Skeetones will get the party started out properly.

Sometime back in early 2009 Joel got a call from his friend Dan Rucinski, who some of you might know as a versatile guitarist / keyboardist / songwriter from Land of Atlantis, and he told him about a project he was creating calle...d Digital Tape Machine. The music, he explained, was intended for use as video game music. He was interested in having Joel contribute keyboards to as many songs as possible, and maybe even help write a few things. Early on, Kris Myers was also brought in to create, edit and contribute both live and electronic drums, loops and samples during the early stages of the songs to make them both club-savvy and unique. Tech house, dance house, deep house, post-industrial, drum n bass and hip hop are all elements of DTM. But the live experience of Digital Tape Machine is as much about gettin clubbers dancing as rockers headbanging. The band made their debut at Wuhnurth music festival in Indiana, and sold out the official Umphrey's McGee after party at the Kinetic playground in Chicago on 12/30/10.