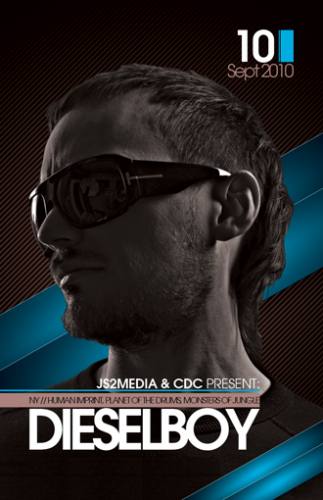 The best known face and sound in American drum and bass for over a decade belong to Brooklyn-based Dieselboy, aka Damian Higgins. Now an international icon in this volatile, UK-originated underground dance music movement, Dieselboy is the most indemand American d&b DJ on the global club, festival and rave circuits on six continents.

Since the early ‘90s Dieselboy pioneered d&b in North America, first in Pittsburgh, then from Philadelphia, exploding in popularity during the first wave rave outbreak in the late ‘90s. His prized mix-tapes and mix CDs have been the gateway for countless loyal fans to the high energy, futuristic, science fiction vibe of d&b. Dieselboy’s style is characterized by flawless execution and meticulous pulse-quickening sequencing that create intensely personal, dramatic, cinematic experiences.