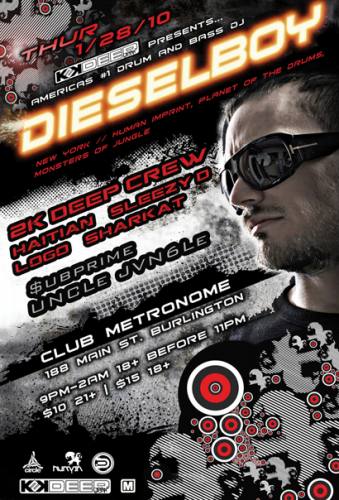 :: 2K DEEP PRESENTS ::
on Thursday, January 28, 2010 at Club Metronome
A Special Evening With America's #1 Drum and Bass DJ...
*DIESELBOY*
(Human Imprint, Planet of the Drums, Monsters of Jungle // NYC)
The best known face in American drum and bass for over a decade belongs to Brooklyn-based Dieselboy aka Damian Higgins. Now an international icon in this volatile underground dance music movement, Dieselboy is the most in demand American DNB DJ in the global club, festival, and rave circuits, across six continents.
Since the early ‘90s Dieselboy has been pioneering DNB in North America. First in Pittsburgh, then from Philadelphia, exploding in popularity during the first wave rave outbreak in the late ‘90s. His prized mix-tapes and mix CDs have been the gateway for countless loyal fans to the high energy, futuristic, science fiction vibe of drum and bass. Dieselboy’s style is characterized by flawless execution and meticulous pulse-quickening sequencing that creates intensely personal, dramatic, cinematic experiences.
In 2000 Dieselboy united with two other North American DNB legends, AK1200 and DJ Dara to create a DNB super-tour, the Planet of the Drums. With MC Messinian who joined in 2001, the POTD moved DNB out of the side rooms and onto the main stages. 2009 marks the POTD’s 10th tour, the longest running annual electronic dance music tour of any genre.
Few DNB artists can claim as hardcore a global cult following as Dieselboy’s...
*The 2K DEEP CREW* w/ DJs HAITIAN, SLEEZY D, LOGO, and SHARKAT
2K Deep can be best described as a coalition of gang bangin' DJs from Burlington, VT. Their crew axiom is to bring to the floor the craziest, loudest, most in-your-face bassline business one can imagine on a club system. Throwing down a mashup of genres at every show, there are no limits to what 2K Deep can play for the crowd. Ranging in styles from electro house to dubstep to drum and bass, the 2K Deep Crew’s sets are never predictable and the DJs thrive on this factor. They believe it is crucial to twist their sets together with multiple genres, mixed in seamlessly, to always keep the audience guessing, "What will come next?" If you want to rage to something fresh every time, this is the crew that delivers. Guaranteed to start as a rave, and end in a riot.
*subPRIME and UNCLE JVN6LE*
subPRIME is the alias of electronic music producer Matt Gutt ... He produces bass heavy music that splices together a variety of genres including hip hop, dubstep, glitch hop, IDM, and drum and bass. His set will be 100% live and 100% original.
Uncle Jvn6le is a DJ who spins a mashup of glitch hop, drum and bass, dubstep, hardocore, and many other things.
----
Thursday, January 28, 2010
Club Metronome
188 Main St. BTV
9pm-2am
18+ Before 11PM <- No Exceptions
21+ $10 | 18+ $15