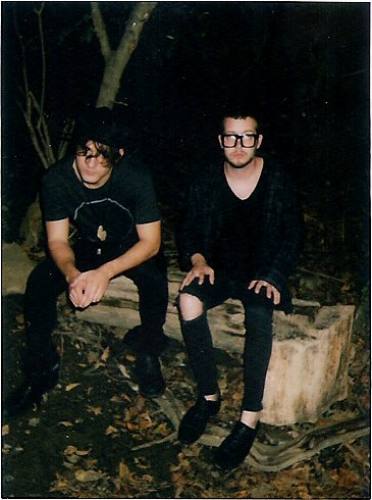 Ask the DJ/production duo DESIGNER DRUGS how many air miles they’ve logged over the past year and the answer requires more than a bit of calculating. “Over 300,000,” Michael Vincent Patrick referencing numerous spots around the world where the group has performed. “I have a really nice apartment in New York City, but I’ve only been there three days this month.”

It’s a testament both to the duo’s popularity and work ethic that that number may become the annual norm. After nearly 50 remixes for everyone from Mariah Carey to Annie to Thieves Like Us, the diverse electronic group, comprised of Patrick and Theodore Paul Nelson, and release their debut album HARDCORE/SOFTCORE on Ultra Records back in 2011.

Where past productions and remixes have been on the poppier end of the musical spectrum, Hardcore conjures up a darker, edgier vibe – think the throbbing, industrial-heavy opening club scene in “The Doom Generation” – yet still retains a melodic center on many of the tracks. “I think we’re making music for the apocalypse,” says Michael, only half-joking. “The state of society is at a place where people just don’t give a fuck and that’s what inspires our music.”

As for the future, more remixes, more original production, more DJ mixes (the onlineDATAMIX series is on 11 and counting) and many more DJ gigs promise to keep the pair busy for the foreseeable future. And no school will stop DESIGNER DRUGS from achieving their musical goals. “I got a month off coming up,” says Theo. “As soon as I get my first free day, it’s back to the studio with Michael.”