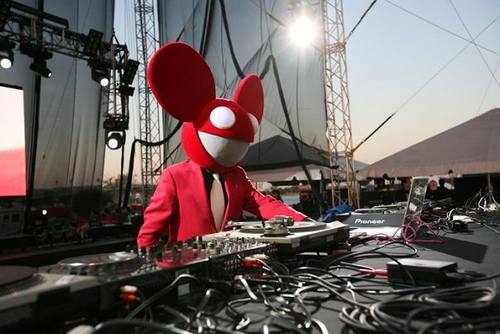 Joel Zimmerman doesn’t like being called a DJ. The 28-year-old dance music phenomenon from Toronto, better known as Deadmau5, rolls his eyes a the description, which he sees as a hopelessly outdated way of describing what he does. His sets are closer to live performances. He plays mostly his own material, assembling tracks on the fly, using cutting edge computer technology, including software he’s helped write himself. “There are no CDs involved,” he explains. “It’s a technological orgy up there and I try and keep it more my music than anyone else’s. If people come out to see Deadmau5 I want them to hear Deadmau5 music.”

It’s an approach that’s catapulted Deadmau5 into dance music’s A-list. It’s no exaggeration to say that he’s the most exciting name in clubland right now. Over the last three years he’s released a string of club hits, starting with the trance-house hybrid Faxing Berlin in 2006. It was followed last year by the euphoric filtered keys of Ghosts N Stuff, while this year he reached Number 14 with the lush atmospherics of I Remember, his collaboration with American producer Kaskade — the track has now sold over 120,000 copies. This October, Zimmerman releases his new album, For Lack Of A Better Name, which brings together the best of his single releases from the last 12 months. It’s not hard to see why the the pulsing dance groove of Hi Friend! featuring MC Flipside and FML’s military percussion and hard-hitting bass hook continue to fill dancefloors around the globe. The first single will be a new version of Ghosts N Stuff, featuring vocals from Rob Swire, one half of drum’n’bass/rock fusionists Pendulum. It’s electrifying stuff.

Hard to believe that three years ago, Zimmerman was all but unknown. He grew up in Niagara Falls, Ontario, 75 miles south east of Toronto. As a kid he was obsessed with computers. When he was 15 he started making chip tunes. “They’re musical compositions made using the chips from old computers,” he explains. Fellow chip tune alumni include Jesse Keeler from MSTRKRFT, while hipster duo Crystal Castles are heavily influenced by the scene. When Zimmerman was 18, his chip tunes attracted the attention of the nu metal musicians in Los Angeles. At the time, artists such as Marilyn Mason were exploring a more electronic sound. Zimmerman ended up contributing to Mötley Crüe drummer Tommy Lee’s 1999 rap metal album Methods Of Mayhem. Ten years later they remain friends as well as collaborators; last year they released two electro house singles — Chicken and Redic — under the name W.T.F.?

Around the same time, Zimmerman became involved with a dance music radio show in Niagara Falls called The Party Revolution. It was a low-budget affair run by the local dance music record shop, Electrified Records. “Back then, cutting edge dance music in Niagara Falls meant Babylon Zoo,” he laughs. His job was “technical whizz kid”. In other words, he was the one who knew how to use a computer. “All those guys were interested in was recording two turntables onto a computer and burning off a CD so they could send it the radio station,” he explains. “I over took them when it came to technology. I learnt about digital audio and making music on computers, new editing techniques. Every new bit of technology that was released to do with making music, I was on top of it, while they were still dinosauring it out playing on turntables.”

Zimmerman is still a technical whizz kid. While he was earning his dance music stripes, he worked as a web developer. Together with long-term collaborator Steve Duda, a programmer and studio engineer from Los Angeles whose CV includes Nine Inch Nails, Zimmerman writes music making software, including one of the programmes he uses in his live show; he describes it as “like a drum sequencer and sample player on crack”. From 2006 to 2007 he worked for Image Line, the Belgian company behind the Fruity Loops virtual studio programme, now know as FL Studios. Add to which, he helped write an iPhone app called Touch Mix, which allows you to mix tracks on your mobile. He’s not at the cutting edge of music technology so much as creating it.

However, in the early ’00s, when he tried to convince local recording studios that they needed to embrace computers, no one was interested. “They had an old school approach to recording music. I was telling them, You’ve got to get a PC. But the mullets as I call them, the proper studio engineers, were really in denial about that kind of thing. It was rocket science to them. They didn’t get it.” Zimmerman did. Eventually he managed to convince a small studio in Toronto to let him install new technology and he helped record numerous local bands.

Zimmerman says that his dream at the time was to be a producer, working on other people’s music. He wrote his own material, “IDM (intelligent dance music) like Aphex Twin, that kind of thing”, but it was more a hobby, “just very obscurely in the background, nothing to do with the kind of thing I make now.”.

His first proper release in 2006 started out as a joke. It was called This Is The Hook, written together with Steve Duda, under the name B.S.O.D. (which stands for ‘blue screen of death’, computer jargon for the Windows error message). They took a house beat and added a digitised voice explaining what was happening. They were taking the piss out of how formulaic house can be and they thought it was hilarious. What they hadn’t counted on was it going to Number 1 in online record store Beatport’s chart.

They decided to write more B.S.O.D. material, not least because as Zimmerman candidly explains: “It was at a time when I was pretty financially strapped. I was earning $1000 a month. My rent alone was $800. Money was pretty tight. We were like, If we can make some money doing this, we should play along with it.” They made a whole B.S.O.D. album and remixed Hurt by Christina Aguilera, but the money ran out and Duda had to return to LA. “We may do some more B.S.O.D. stuff in the future,” says Zimmerman. “And we’re still working on software together.

One of the first things Zimmerman wrote after Duda left was Faxing Berlin. He released it under the moniker Deadmau5, using the same name as his one-man web developing business, which was itself named after a dead mouse he found in his computer one day (the unusual alphanumeric spelling is so it can function as a user name for online chat-rooms). He sent Faxing Berlin to British DJ Chris Lake, who passed it to Pete Tong, who played it on his Radio 1 show. The subsequent exposure turned it into one of the biggest records of 2007. The clever fusion of trance chords and house beat spawned a series of imitators. “It was quite a buzz to know that I’d influenced the course of dance music,” says Zimmerman with a smile.

Tracks such as Not Exactly, Sex Lies And Audiotape and The Reward Is Cheese followed. Last year, Deadmau5 was the biggest selling artist on Beatport. However, Zimmerman’s next masterstroke was to do with his image. Part of the Deadmau5 logo was a grinning mouse head with oversized ears. He decided to turn it into a mask. He contacted a firm in Toronto who made props for films, who agreed to build it. The first time he wore it at a club in Halifax, Nova Scotia, the audience were stunned. “I remember putting it on and looking out of the visor and seeing everyone in utter bewilderment,” he says. “They were like, Who is this guy? Is he for real? But they warmed up to it real fast. When the lights came on in the helmet and they started blinking to the beat, the place went crazy.” It was a stroke of genius. Dance music is often accused of lacking a sense of theatre. Not Zimmerman. There are shades of Daft Punk about the Deadmau5 head.

He tells a story about wearing a crystal encrusted variant of the mouse head to the 2008 Grammy Awards ceremony, where he was nominated for Best Remixed Recording for his version of The Longest Road by Californian house producer Morgan Page. “Even though no one knew who I was, as I was walking up the red carpet, all these reporters and TV crews were stopping me. In the end I actually missed the award because it took so long. although it didn’t matter because sadly I didn’t win.”

No Grammy just yet, then, but you wouldn’t bet against him winning one in the future. Deadmau5 is on a dizzying upward trajectory. Dance music just got very exciting again.

The majority of their debut album, $O$, was released for free on the Internet in 2009 - Ninja also handed out free albums with hand-drawn artwork at live shows called $O$: Burnt By the Master.

As of Q4 2009, the band were ‘officially’ set to be working with Magnetron Music and were due to release a very special, limited-edition package for 2010 featuring the album, a DVD and a book. Die Antwoord’s $O$ Album/DVD/Book package had a European release pending (featuring photography by Roger Ballen).

But, it is impossible to buy there music anywhere, it seems…

This was until Boing Boing posted their music video for ‘Enter The Ninja’, that they shot ahead of big-name acts on Google Trends. This, coupled with Limp Bizkit’s Fred Durst and Katy Perry ‘tweeting’ about the group, caused a massive influx of interest in the band from various record labels worldwide with Ninja being quoted as saying ”“Live Nation, the biggest events company in the world, wants to make a deal with us. There’s an international bidding war going on at the moment over who’s going to represent us. EMI Worldwide and Interscope Universal are bidding for my soul.”

Regardless of who ends up signing them, the forth-coming debut album is currently now available to stream online in full and there’s a free download titled ‘Jou Ma Se Poes in ‘n Fishpaste Jar’.


check out these DIE ANTWOORD videos: