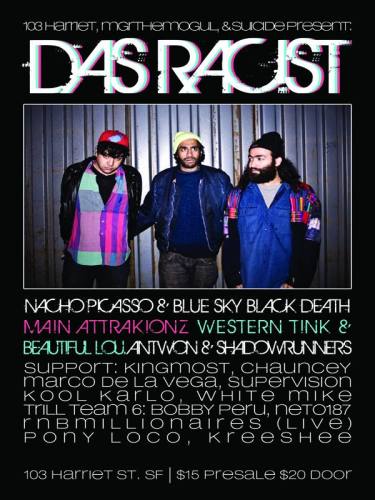 
Das Racist is a hip hop group, formed in 2008 and based in Brooklyn, New York, comprised of Queens-born Himanshu Suri and San Francisco-born Victor Vazquez. Suri and Vazquez met in 2003 at Wesleyan University in Middletown, Connecticut where Victor was Himanshu’s resident advisor in a “Students of Color for Social Justice” theme dormitory. Suri was a member of the Eclectic Society and is also an alumnus of School of Oriental and African Studies. Vazquez is also a member of Boy Crisis. The duo was later joined by hype man Ashok Kondabolu, known as Dap, for live performances and in music videos. Kondabolu and Suri are both alumni of Stuyvesant High School.


Known for their use of humor, obscure references, and unconventional style, Das Racist has been both dismissed as joke rap and hailed as an urgent new voice in rap. Spin magazine picked Das Racist as one of 50 acts to watch at the 2010 SXSW festival, and in April 2010, MTV Iggy selected Das Racist as one of the “25 Best New Bands in the World”. Rolling Stone declared the song “hahahaha jk?” from Sit Down, Man one of the fifty best singles of 2010.


Das Racist’s unique style has a strong polarizing tendency; their set at the Pop Montreal festival was described as “the most divisive show seen at the festival”. They describe their approach to music as “‘deconstructionalist’: sawing the legs out from under hip-hop as they celebrate it”.The New York Times wrote “Das Racist’s lack of piety has become an aesthetic of its own, with songs that are as much commentary on hip-hop as rigorous practice of it”. The Root said Das Racist could speak for both “the ‘hood or the nearest gated community.” Playboy called the duo “equal parts hip-hop and Cheech & Chong”.


His Cannabis Club card (probably) reads "Jesse James," but Seattle rapper Nacho Picasso willingly shares a name with something you'd expect to find at a Johnny Rockets in Barcelona. You will either think the alias is awesome or awful. There is no in-between. Yet it's instantly memorable and more fitting than anything that references a Jack Black/Lucha Libre vehicle has any right to be.


Picasso proves that you don't need to practice the art of storytelling when you've mastered the art of saying nothing. And For the Glory is basically a paean to girls, guns, tattoos, chronic, and comics. There is an entire song, "Marvel", wherein Picasso basically compares himself to every summer blockbuster of the last decade. While it should feel like second-rate MF Doom, Nacho spits slick and (partially) revelatory internal rhymes. He repeats, "Smoking/ Reading comic books," until it becomes mantra, like the kid from the cover of OutKast's ATLiens grown up.