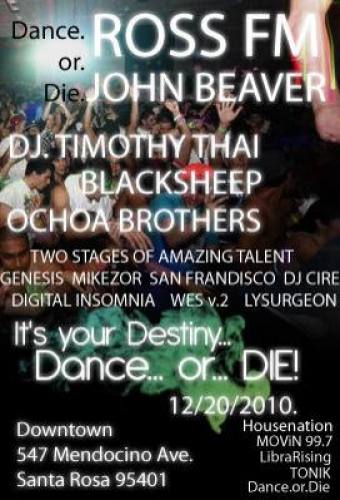 What: Dance or Die Electro Madness

Tonight, San Francisco comes to party up here with us. In the heart of the Northbay, Downtown Santa Rosa, Ross FM & John Beaver collaborate with Timothy A Thai to help ignite the EDM Scene up north. we're bringing you our next event with two Stages full of Drum n bass, Electro House, Dubstep, Fidget, Bassline, & Grimy music. You dont want to miss this! Monday 12/20/10 Winterbreak

Purchase your tickets now! Tickets start at 10, then rise to 15, 20. Door tickets will be LIMITED, event is expected to sell out.

PREMIERING For the First Time in the NorthBay:

San Francisco’s award winning radio host, DJ and Producer. With a passion for both music and broadcasting, Ross.FM has taken his sound to not only to dancefloors of the hottest clubs and underground parties – but the airwaves as well. As Co-Host of “HouseNation” since 2006 (CBS Radio / Movin 99.7FM) Saturday nights and “BOUNCE Radio” Friday nights (PULSE 99.7HD2) Ross has helped bring the sounds of dance music to the masses! As co-founder of the record label Vibrance Recordings, his music production work has been played on dance floors around the world, along with national and international radio shows including BBC Radio1 in the UK by both Pete Tong and Judge Jules. Vibrance Recordings has recently released it’s 23rd EP and celebrates it’s 5 year anniversary in 2010.

As one of the fastest rising stars in the Bay Area music scene John Beaver has been known to destroy dance floors. With his uplifting electro trance style he has been compared to such talent as TIESTO and FERRY CORSTEN. He started out as a resident DJ for nationally know companies such as Clockwork (Metropolis/Atlantis), Coolworld (Cyberfest/Plant New Year) and Skills DJ Workshop (Popsicle/Love). In 2004 he landed an exclusive spot as a resident DJ at 1015 folsom, San Francisco's premiere nightclub! In the last couple of years he has opened for major acts such as Ferry Corsten, Above & Beyond, Benny Benassi, The Thrillseekers, Andy Moor, Simon Patterson, Aly & Fila, Ronski Speed, Darude, Blank & Jones, Kyau & Albert, Steve Aoki, Adam Sheridan, Deepsky and the list goes on. In 2006 John embarked in a new direction by creating Libra Rising Recordings with J Scott G formally of Deepsky and the now current-Summer Channel. With smash hits such as "Undertow" and "1000 Miles" played by most all of the top djs in the world this will be a label to look out for in the future! If you get a chance, come watch this rising star before he becomes the international superstar he is destined to be!