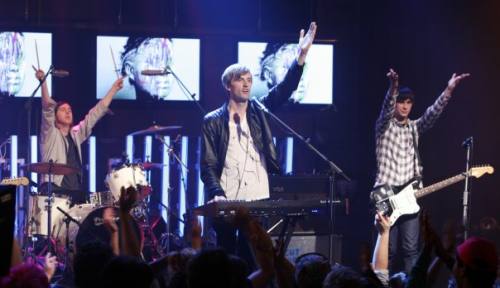 When Cut Copy offered their hand on Where I’m Going, the first leak of their third album, it was an open invitation to an uncharted destination. The festive explosion of kaleidoscopic Californian acid hippie reborn as UK glam star explored new terrain, hinting a further evolution for a group that is yet to make the same record twice.

Zonoscope was dreamt in the comedown of In Ghost Colours, the album which cemented Cut Copy as a global sensation. Their perpetual touring cycle found the band headline a stage at Lollapalooza, become the first Australian act to play Colombia since INXS, have fire marshals shut down an LA performance mid-set as crowds began to buckle the seams of the Henry Fonda Theatre and be raced to the Pitchfork Festival via police escort following a cancelled flight.

After over two years of exhilarating chaos, frontman Dan Whitford bunkered down at home to flesh out rough synth and vocal skeletons, before heading into the studio with the band to bring these textured grooves to life. Whitford describes the wonderland which he set out to create with Tim Hoey, Mitchell Scott and Ben Browning, “All the way along we had this weird vision of a tropical, jungle, tribal sound. A place or an idea that we wanted to reach with some of the songwriting; to explore a looping hypnotic trance and revise the whole palette of what Cut Copy was about.”

Rather than fighting the strictures of conventional studios, the band produced the album on their own terms in a warehouse located in Melbourne’s northern suburbs. Minds ran wild with a free approach to experimentation during elastic sessions held in a space littered with piles of vintage studio equipment and instruments. Cheaply decking out the makeshift playground with drum enclosures built from pyramids of op-shop mattresses, the surroundings facilitated a full-length of uncompromised high fidelity. After spending months in this low pressure environment, they were able to fully realize their aural utopia of organic psychedelia intersecting with repetitive robotics.

A melting pot of ideas streaming from a collective of music fanatics, the album embraces new combinations that span a rhythm section on motorik overdrive (Alisa), the reincarnation of Chicago’s raw house pioneers producing EBM deep in the wilderness (Pharaohs & Pyramids and Blink and You’ll Miss A Revolution) and the epic 15 minute closing minimal disco mantra (Sun God). Seamlessly bridged together by a series of ambient hallucinatory miniatures, the percussion drenched celebrations are lively awakenings. Whitford runs through the exotic arsenal of percussion which they gathered to give their tracks that infectious tropical propulsion; “we used all sorts of strange bongos, rototoms, congas, 10 kinds of shaker, 15 different cowbells; anything and everything. Even wine bottles filled with different amounts of water.”

The band mixed the record in Atlanta, working with Ben Allen who has previously elevated albums from Animal Collective, Deerhunter and Gnarls Barkley. Whitford explains that the decision to work with their newly found kindred spirit was due to their disparate musical backgrounds, “Ben comes from a different perspective having started out in hip-hop/urban culture [and he’s tapped into] Atlanta’s history of southern music, funk and soul. We were really interested in throwing ourselves into something like that, rather than work with someone from the house music or indie guitar world.”

In their own space and time, these audio architects have designed a stimulating world where nature and machines harmonize; a paradise for escapists to loose themselves in eternal euphoria. Zonoscope is Cut Copy boiled down to their purest form.