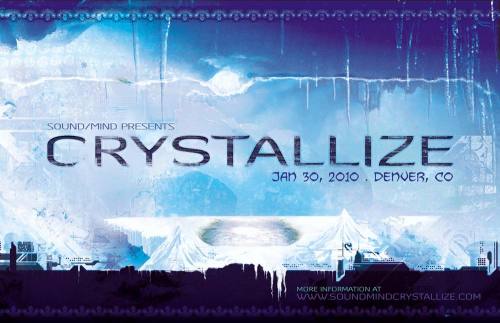 Sound/Mind Productions Presents:
***Crystallize***
January 30th 2010
Denver,CO
$15 at the door
9pm-7am
Join us for a night of Uplifting Positive Psychedelic vibes on the 1st Full Moon of 2010!
Sound Reinforcements provided by Sound/Mind Productions!
Special Girl/Boy Dj line up on the Main Stage!
Main Stage~ Audio Guides
Coral (T.O.U.C.H Samadhi) Seattle, Wa
Coral began her djing journey in 1999 when she was introduced to the irresistible sounds of psytrance. Playing all over the US at different parties and festivals...she has become thoroughly immersed in the music and brings her love of psytrance for the last ten years to you... Coral is passionately involved in her sets, taking you places with pure energy and non stop driving beats!
Paradigm ( Logical Light/Straylight) San Francisco,Ca
Paradigm (not to be confused with the Colorado crew of the same name) is considered by many to be the most technically proficient full-on DJ in the US scene. With nearly a decade of experience behind him, Paradigms reputation for surgical mixing and dynamic sets has clearly put him at the front of the DJ pack. Known mostly for his morning full-on sets, he is equally adept at night, twilight or anywhere in between. As an organizer he has been responsible for some of the most talked about and epic events on the West Coast, including Gemini Festival 2009.
Dj Lucina ( DreamCatcher NYC) New York City/ New Mexico
Originally from San Francisco, DJ Lucina quickly found herself as a west coast underground favorite. Entering the scene in 2004, she found herself at the decks of many pivotal events during that time. After a move to New Mexico and a year spent playing the deserts there, she has more recently reemerged as a full spectrum DJ in NYC. Once known as a morning full on DJ, she has mastered the art of being able to fit and play any slot thus making her one of the better kept secrets in the scene.
Solomoon (Ultimae Records/Metameme/Gaian Mind) Denver, Co
After discovering the trance-ambient and Goa-trance sounds of the early 90’s, Solomoon took up the art of DJing and traveled great distances around the globe to explore the resurgence of the archaic trance-dance ritual. In the summer of 2008, he was honored to be invited as a label dj for the venerable Ultimae Records, France. His sets are considered to be an expression that combine intelligent melodies, tribal rhythms, organic textures, and ethnic emotions in an attempt to transcend musical genres and cultures through a conscious exploration of spirituality through technology.
E11even (Sound/Mind) Denver,Co
Earthmen (Sound/Mind) Denver,Co
Sensory Orchestra ** Live** ( Sound/Mind) Fort Collins,Co
Audio Virus ( Sound/Mind) Breckenridge,Co
Groovin by the Fire Stage ~ Audio Guides
Dub/Chillout/Ambient
Madhava ( Sound/Mind) Denver, Co
Kauze- N- FX (Mountain Vision) Denver, Co
Metaphorm (T.O.U.CH Samadhi) Boulder,Co
Dj Orpheus ( Rhythm Sanctuary) Boulder,Co
Buddha Bomb (KGNU Radio/Family Moons/OneTribe/ Rhythm Sanctuary) Boulder,Co
Shamanic Ritual Technology ( Ninja Nation) Fort Collins, Co
Mukti ( Onetribe/ Metameme/ Mountain Vision) Nederland,Co
Deco designed by:
Psylotus ( Organic Mechanix) San Francisco,Ca
Lux Imagica Denver,Co
Lighting Designed by:
Photonic Bliss Denver,Co
Live Visual Stimuli
eNdo ( Stimulate Productions) Phoenix, Az
Live Vibrational Painting by Zack Emmendorfer Denver,Co
Live Painting by Michael Garfield Denver,Co
Pyrohedron Denver,Co
Altar & Main Crystal Grid designed by Inner Geo Matrix & U!
** Please feel free to help contribute and create the Altar **
Flyers coming soon! = )
Want to help us promote? Contact me @ E11even604@gmail.com
For more information about the event come check out our website
http://www.soundmindcrystallize.com/
About | Advertise | Contact | FAQs | Terms of Use | Privacy Policy | Accessibility Policy © 2022 - TheUntz.com. All rights reserved.