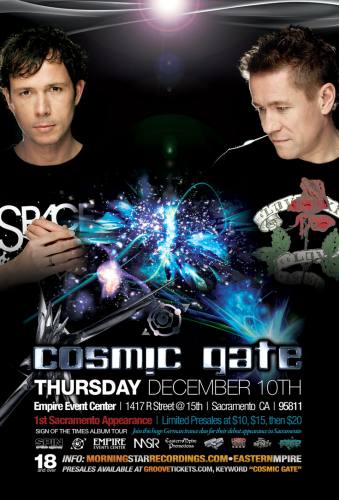 Talent:
Cosmic Gate (the hottest German trance duo around)
Info:
Empire Event Center, Morning Star Recordings, and EasternMpire proudly welcomes Cosmic Gate with their “Sign of the Times” album tour; their first Sacramento appearance ever. This German duo has been well-known within the Electronic Dance Music scene for over 10 years and counting. Exploding onto the scene with their 2000-2001 meteoric hits "Exploration of Space" and "Fire Wire". With an amazing series of production releases in the last four years, they have placed in Dj Mag's top 100 international Dj's going on six years now and have achieved the #19 spot for 2009. Cosmic Gate is one of the hottest duos in the Electronic Dance Music industry, hands down. Come join them for their debut appearance in Sacramento.