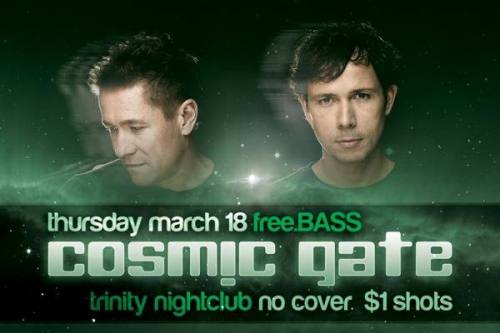 USC Events, Housewreckin, Kaos Theory and Guy present....
free.BASS Thursdays @ Trinity
NEON PARTY!!!!!!
(Dress in Anything NEON)
Featuring:
COSMIC GATE
Krefeld, Germany
www.myspace.com/cosmicgate
Over 10 boundary-pushing years, Nic Chagall and Bossi have evolved Cosmic Gate into one of the most creative and highly-sought-after electronic music acts in the world. Revered uber-producers, their musical acumen has seen them become long-term favourites of the trance’s Big 5 DJs with their 4 hugely-received albums transporting anthems like ‘Body of Conflict’, ,Not Enough Time‘, ‘I Feel Wonderful’, ,F.A.V.‘, ‘Analog Feel’, or the classics ‘Exploration of Space’ and Fire Wire to the dancefloor. As DJs, their kinetic, blood-pumping live performances are seen by hundreds of thousands of club and festival goers annually.
Over their production lifetime, the Cosmic Gate remixes have become almost as fêted as their productions. Essentially a blow by blow of trance music’s A-list, Nic and Bossi lent their studio know-how to productions by the likes of Tiësto, Ferry Corsten, Above & Beyond’s OceanLab project, Paul Van Dyk, Deadmau5, Rank 1 and Blank & Jones. Most recently they rewired John O‘Callagan‘s ‘Find Yourself’ to devastating effect, put their hands on Armin van Buurens ,Rain‘ and created two highly-praised remixes of ‘Vincent De Moor - Fly Away’ and ‘Veracocha - Carte Blanche’.
TAZIX & ALLYA
Vancouver BC - Twisted, Cargo, G+G
Tazix & Allya have graced the West Coast with their unique sound for the past five plus years. A blend of Hard and Progressive Trance infused with Electro and Tribal House with a dash of Techno and Tech Trance for added kick only describes the tip of the iceberg where these two DJs are concerned. Their outgoing nature and charismatic stage presence has made them crowd favorites in Canada and abroad.
Working closely with Twisted and Cargo, the two have built up quite a resume, having opened up for everyone from Armin Van Buuren and Ferry Corsten to Benny Benassi and Roger Sanchez. Be it Trance, House, Progressive, or Electro, these guys know their music and they know how to work a crowd into a frenzy.
Tazix’ first track “Raindrops” with good friend Benjamin Leung aka Rodi Style has just seen release on Tidy Trax and with more projects written with Allya like “Don’t Break It” and “Close Encounters” getting great feedback on the dance floor it seems a certainty that you haven’t heard the last of these two!
CHANNEL SURFER
Televisionary Recs. :: Armada Recs. :: Nulogic Recs.
BLUE ROOM: DnB/Dubstep
SLANTOOTH
VENUS
KONCEPT 1
CORD
CARD ROOM: Hip Hop - Mashup
DJ TRE
SPAM-I-AM
DJ WANG
free.BASS every Thursday at...
TRINITY
111 Yesler Way in Pioneer Square
www.myspace.com/trinitynightclub
www.trinitynightclub.com
21+ w/ ID
9pm - 2am
NO DRESS CODE
NO COVER
$1 shots +$3 beers