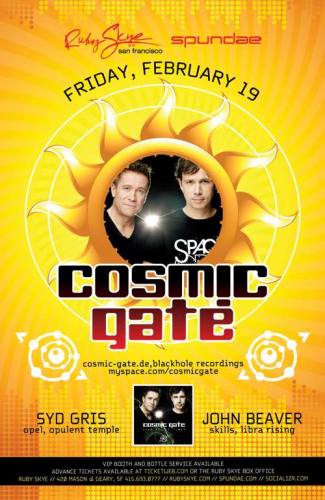 Ruby Skye & Spundae Present
COSMIC GATE
Friday, February 19
Over 10 boundary-pushing years, Nic Chagall and Bossi have evolved Cosmic Gate into one of the most creative and highly-sought-after electronic music acts in the world. Revered uber-producers, their musical acumen has seen them become long-term favourites of the trance's Big 5 DJs with their 4 hugely-received albums transporting anthems like 'Body of Conflict', ,Not Enough Time', 'I Feel Wonderful', ,F.A.V.', 'Analog Feel', or the classics 'Exploration of Space' and Fire Wire to the dancefloor. As DJs, their kinetic, blood-pumping live performances are seen by hundreds of thousands of club and festival goers annually. Playing a 100 nights every year, it's this ever-visible club presence that saw them reach their highest position to-date on the DJ Mag Top 100, landing as highest climbers at No.19 in 2009.
Over their production lifetime, the Cosmic Gate remixes have become almost as fêted as their productions. Essentially a blow by blow of trance music's A-list, Nic and Bossi lent their studio know-how to productions by the likes of Tiësto, Ferry Corsten, Above & Beyond's OceanLab project, Paul Van Dyk, Deadmau5, Rank 1 and Blank & Jones. Most recently they rewired John O'Callagan's 'Find Yourself' to devastating effect, put their hands on Armin van Buurens ,Rain' and created two highly-praised remixes of 'Vincent De Moor - Fly Away' and 'Veracocha - Carte Blanche'.