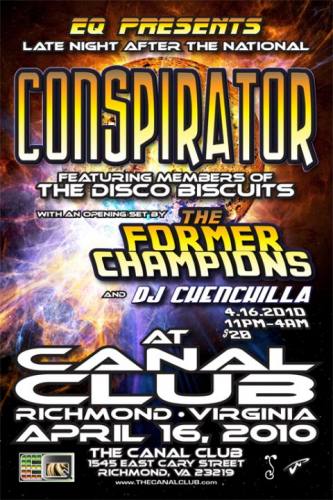 What: CONSPIRATOR at CANAL CLUB

CONSPIRATOR
Conspirator has been several years in the making. In late 2003, Aron and Marc, keyboard and bass players from the Disco Biscuits, set out to find a producer to help them bring to life the tracks they has made for a Trance-Fusion Super group show they played at Webster Hall in NYC, earlier that year. As fate would have it, they were quickly brought together with Omen, a young, hungry revolutionary producer from Final Phaze NYC. Conspirator has gone on to feature many guest musicians including Lane Shaw of PNUMA TRIO, Murph of STS9, Jake Cinninger of UMPHREY's McGEE, Johnny Rabb of BIODIESEL, Tom Hamilton and Tom McKee of BROTHERS PAST and of course Jon "The Barber" Gutwillig and Allen "DrFameus" Aucoin of THE DISCO BISCUITS have sat-in from time to time! With CONSPIRATOR you never know what to expect...
THE FORMER CHAMPIONS
(http://www.myspace.com/formerchampions)
Former Champions are a modern musical ensemble focused on expressing ideas and emotions through sound. Targeting to influence the human spirit with dynamic groove-based compositions, their music has been described through a multitude of genres including Rock, Funk, World Beat, Live Electronics, and Nu-jazz. By utilizing guitar, bass, keyboards, drums, vocals, samples, and other various instruments the Champs' performances bare a uniqueness that sets them apart. Each performance different from the last, they continue to evolve their sound as a dynamic portrayal of themselves and of the experiences around us today.
DJ CHENCHILLA of The Silo Effect will perform between artists.