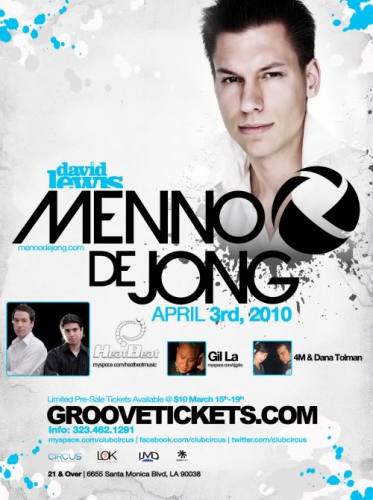 Artists:
Menno De Jong
Heatbeat
Gil La
Description:
Master of numerous music industry disciplines, Menno de Jong has already carved enough notches on the dance tree for someone twice his age. His production & remix career has seen him record for some of Europe’s biggest trance labels and he’s the owner of lauded Dutch independent Intuition Recordings. A bona-fide Podcast pioneer, he’s produced and presented the much respected and widely-syndicated Intuition Radio show for the last 3 years. As a DJ he’s closed gigs for Tiësto & Paul van Dyk, is currently ranked at No. 62 in DJ Magazine’s Top 100 Chart and has spun in over 25 countries. At just 24 years old, he’s is without question the next challenger to the Dutch trance throne!
Born into a musical family, it took very little time for Menno to start experimenting with the array of synths corralled in his father’s studio. His production career started in auspicious fashion in 2004 when ‘Guanxi’, his debut production was signed to Anjunabeats. The consummate music workaholic, Menno has continued to conjure one magical, melodic feat after another. Double-header ‘Magma’/‘Momentum’ and ‘Sjamaan’ were released on Fundamental (in 2005 & 2007 respectively), while ‘Tundra’ (2005) and ‘Nolthando’/ ‘Solid State’ (2007) appeared on his own Intuition label. Remix-wise, he has re-scripted tracks for The Thrillseekers, Karen Overton & Mark Otten, amongst others and to ever-increasing acclaim.