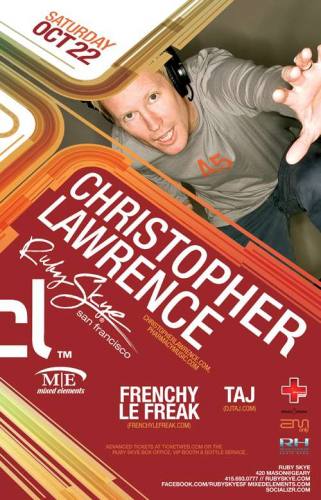 
Christopher Lawrence is one of the biggest and most popular names in trance today.


He clocks up over 250,000 frequent flyer miles a year and the list of international events he plays is too long to mention. Christopher cites recent favorites as Englands’ Global Gathering, Belgium’s Antwerp is Burning, Australia’s ‘Two Tribes’ and Tokyo’s Ageha.


As a producer, Christopher has released a string of tracks, notably ‘Attention’, ‘Scorcher’ and ‘October’s Child’, which have been played by DJs from Paul Oakenfold to John Digweed, Paul van Dyk to Tiesto. Christopher's artist albums include ‘All Or Nothing’ and ‘Un-Hooked’, a retrospective of his work for Hook Recordings.


Christopher’s website currently receives more traffic than any other DJ’s in the world – other than Tiesto!