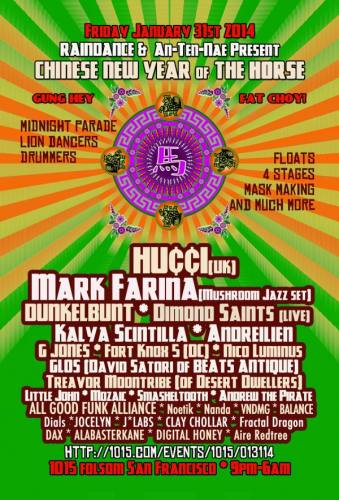 
JOIN US IN CELEBRATION

Hucci creates tracks that break away from generic trap music. Between his seamless transitions, fitting samples, and creative melodies, Hucci has a deep understanding of how to make catchy and unique tracks. Hucci continues to impress with his smoother and chiller trap music.

MARK FARINA
Drawing from his vibrant youth, which included being a trumpet player in marching band, a drummer in a nu wave cover band and a guest DJ, Friday nights on WNUR (Chicago), Mark found his passion for the luscious world of vinyl, turntables and nightclubs. At 16, Farina began his DJ career as a resident at Chicago's underage mecca, Medusa's. At the same time Mark joined forces with emerging DJs Derrick Carter and Chris Nazuka then moved into a loft space called Rednail. Rednail became infamous not only for raucous parties but also as the home to the trio's first productions under the moniker, Symbols & Instruments. Their release,"MOOD," sold 35,000 copies in the US & UK and is credited as "the first ambient house track."

Farina relocated to San Francisco in 1992. Fans embraced Mark's downtempo style and he started co-hosting a weekly Mushroom Jazz club night in '93. In 3 short years, Farina established a fanatical, cult-like following for his Mushroom Jazz sound and in 1996, OM Records released the first mixed comp CD, simply titled, Mushroom Jazz. Since then, Mark has released 7 volumes of Mushroom Jazz with 2013 marking the 20th anniversary of the series. Other notable releases include OM's Seasons, San Francisco Sessions Vol. 1, Connect, House of Om, Live in Tokyo, and Fabric 40.

When Mark's not touring the world, headlining festivals including Harbourlife (Sydney), Southport Weekender (UK), DEMF (Detroit), Coachella (CA) and T in the Park (Scotland), you're likely to find him in his studio working on new releases or podcasts for his label, Great Lakes Audio. On days off he'll be cruising his '68 Toronado with his son, Dylan (aka "little peanut"), and his Yorkie, "Pumpkin".

Voted as one of the top DJ's in the world by URB, MUZIK and BPM magazines, Mark Farina's taste making skills continue to turn the heads of seasoned Dance Music veterans as well as newcomers to the scene.


KALYA SCINTILLA
Traversing the cosmos, gliding across dimensions beyond time and space, Kalya Scintilla brings universal shamanic journeys through his music to planet earth straight from his heart. His music paints sacred soundscapes with world fusion beats from ancient futures hidden amongst our forgotten memories to bring forth lush healing vibrations to activate the dormant codes within us. Infusing his lovefor nature, tribal healing, sacred geometry, and Hathor wisdom; Kalya is able to birth heart opening crescendos that open doorways into our personal and collective awakening. Audiences across the world have successfully received his musical transmissions enabling his ability to travel and play at festivals across continents. His vision for the future holds his devotional intention to plant more seeds of galactic sound alchemy to be felt and experienced by all.


DUNKELBUNT
[dunkelbunt] aka Ulf Lindemann, born in 1979 in Hamburg (D), lives and works as a DJ, composer, producer, radio editor and mixer of spices in Vienna (A) since 2001. His name [dunkelbunt] represents diversity and the ongoing search for ever new musical fusions and styles. [dunkelbunt]´s list of cooperations with bands and musicians seems to be as extensive as the musical waters he crosses. Being a gifted piano player himself [dunkelbunt] redevelops his own distinctive style and musical sense with every musical influence and every ethnic group he comes across.

Since 2006 Ulf Lindemann travels the world on behalf of his music: cities like New York, San Fransisco, Istanbul, Paris, Melbourne, or Kapstadt were just a few of the stops on his 2007/08 tour to promote his debut album MORGENLANDFAHRT. r festival appearances.

MORGENLANDFAHRT is a mélange of Dub, Reggae, Klezmer, Electro Swing, Jazz, Electronics, Trip Hop and Break Beats - woven with a Balkan twist. Numerous co-operations with both Viennese and international musicians from the Balkan and Klezmer scenes have enriched many of the tracks on the album, namely performers like 5nizza, Fanfare Ciocarlia, Amsterdam Klezmer band, Harry Stojka, Östblocket, MC Killo Killo, Orient Expressions and many more.

It was this side of Vienna, which let Ulf discover his second passion: he mixes and blends exquisite spices from India, Africa, South America and Europe. Both following old recipes and inventing his own he creates Berbere (Ethiopia), Ras el Hanout (Morocco), Coffespiece, Tandori Masala (India), Cinq-epices (China), bread herbs (Austria), herbal salt and many more.

In a certain way cooking and composing seems to be something very similar to [dunkelbunt]. Basically he simply uses different ingredients: herbs or instruments, sounds or colours, taste, smell, or look. It all comes down to the search for an harmoniuos whole. Nuances will come with the seasoning. Food is both – one fort he body, the other fort he soul.

Although the musical essence rests upon the South-eastern corners of Europe, sounds from all around this planet are to be enjoyed: from Vienna to the Balkans, through Anatolia and the Middle East, India, North Africa, not to mention South America, to Jamaica and straight to the swinging North American Thirties.


DIMOND SAINTS
Deep in the heart of the Dimond District in the land of oaks, out of the ashes and the bleakness comes a new sound tearing and bursting the bubble of mediocrity. The music of drips of passion, deep pulsing beats that make you sweat. We are the Dimond Saints.
About | Advertise | Contact | FAQs | Terms of Use | Privacy Policy | Accessibility Policy © 2021 - TheUntz.com. All rights reserved.