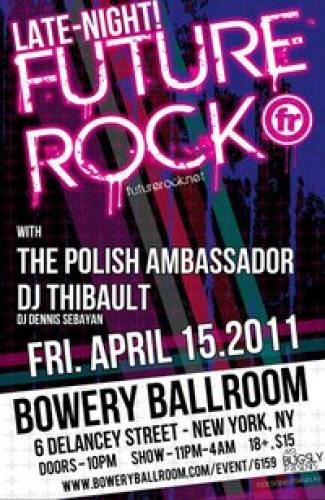 Please join on for this very special night, as Future Rock will be throwing down a late night show, after The Disco Biscuits finish tearing up Best Buy Theater! Future Rock has changed their schedule to allow time for all of those going to Best Buy, to come down to Bowery Ballroom for this epic dance party!

**For all other inquires: info@mrbugsly.com**

Future Rock is electronic sensory overload. The trio has steadily been touring the US, electrifying audiences and developing a dedicated following during their journey. Their legendary late night performances at festivals and after-parties have quickly confirmed their status at the top of the live electronic scene. Coupled with an explosive light show, FR certifies an unparalleled multi-sense experience. The Chicago-based trio exhibits an uncommon grasp of minimalist, yet visceral, rock. Skillfully manipulating live loops, synthesizers, filters and an electronic drum kit, the trio succeeds in creating a larger-than-life sound that sends crowds into frenzies.

The Polish Ambassador is a beat machine from the future. Hailing simultaneously from the far reaches of other dimensional Universes and... Oakland, California, this dude drops his own unique blend of electro-funked, glitch-tweaked, wobble-freaked breakbeats that will have you dropping that bottom like it was 92.....3092, that is.

Claiming to be Poland's ambassador to the Universe, Sugalski has released 5 studio albums, all independently. Diplomatic Immunity in 2007, The Phantasmal Farm in 2008, I Found Him. Now I Must Kill Him in 2009, Mating Season (released under the Ample Mammal alias) and First Words in 2010. All 5 albums have obtained favorable press and achieved regular rotation on college, independent, and internet radio.