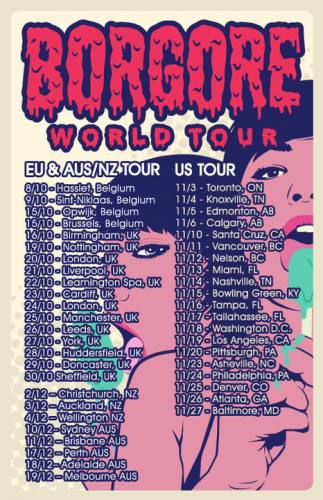 Borger is his family's name.

Gore is a genre of horror films and radical metal music.

Borgore, a musician from Tel Aviv, Israel, has been involved with music since his early childhood. Now, translating his love for melding genres into being a producer of what he calls "gorestep", meaning Dubstep and then some.

For the first time in Knoxville, Borgore serves up some fresh and tantalizingly sexy & decadent beats, hops & drops.

He's also drummer of Israeli Metal band Shabira and alongside Tomba he's one half of Dubstep producer duo Alphamale Primates. He boasts load of huge tunes and massive releases including his originals Ambient Dub Shit, Nympho & Ice Cream and the massive remixes of Passion Pit's Sleepyhead and Rusko's Woo Boost.

Supporting this Shindig will be, in 15min tag team intervals: