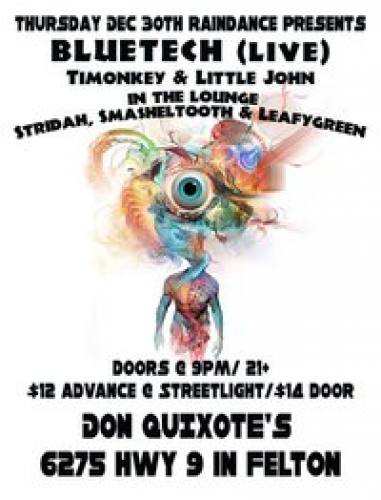 What: BLUETECH in Santa Cruz

We are thrilled to bring BLUETECH into the area the night before New Years Eve. He does not need much of an introduction, a true genius.

for full bio scroll down

A classically trained pianist and master of the art of software

production, Bluetech's love of melody and his exquisite sense of

sound design makes him one of the most ingenious producers today.

His sound emerges from custom-built software instruments and

synthesizers and blossoms into a unique blend of idm, downtempo

and electro-infused dub that encompasses musical styles from

different parts of the globe. Ripe with emotive vistas, reflective

reflects on nature’s expression of being.

sound than on his previous releases. With the addition of live

instrumentalists and vocalists, such as Dr. Israel, Katrina Blackstone,

and Tina Malia, listeners are presented with an inviting point of

departure into the warm, spacious realms of his signature mid and

In addition to “Love Songs To The Source,” Bluetech has four

releases on the internationally acclaimed Aleph Zero Records, as well

Music and his own Native State imprint. Following the release of his

Times labeled Bluetech “one of the best ambient artists.” He has

toured extensively throughout the United States, as well as