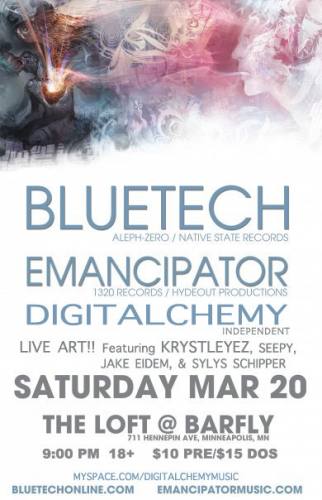 What: Bluetech and Emancipator @ The Loft at Barfly

Brought to you by TCD (this is not a dubstep show, it is Ambient, downtempo, IDM, Trip-hop.)
Bluetech
http://www.myspace.com/iambluetech
Emancipator (LIVE set)
http://www.myspace.com/emancipator
BLUETECH-
Evan Bartholomew, under the moniker Bluetech, produces his unique style of experimental noise from San Diego, CA. Classically trained on the piano for public performing, Bartholomew deviated from the traditional sounds and began to express the rhythms that sprouted from within him, and Bluetech was born. This resulted in his interpretation of nature's expression of being, a sound that is dronal ambient, downtempo, improvisational. He devoured the electronic potentials for musical expression and conveyed it in IDM, digidub, and psychedelic trance.
Bartholomew created and runs his own art collective in San Diego and does commercial sound design and production for both national and regional clients. He also writes and produces his own songs. "The Rubicon", "Prayers For Rain", and "Mezzamorphic" originally appeared on an EP released by Truffle Records, and brought the name Bluetech to a larger audience. In September 2003, these songs appeared on Bluetech's first album, Prima Materia, released by Waveform Records. ~ Eleanor Ditzel, All Music Guide
EMANCIPATOR-
it must seem like this young electronic producer came out of nowhere this year. Emancipator played his first live show in July 2009, opening for Bonobo at the Roseland Theater (cap. 1500). Since then, he’s toured with Bassnectar, drawn crowds at festivals like Trinumeral and Symbiosis, and closed out Sound Tribe Sector 9’s late night parties in Denver at the request of the band.
But those in the know have been following Emancipator since he self-released his first album, Soon It Will Be Cold Enough, at the age of 19 in 2006. His agile melodies layered over headnodic, immaculately-produced beats captivated fans across the internet and across the world. “Soon It Will Be Cold Enough” was picked up by Japanese super-producer Nujabes, pressed in Japan and sold 5,000 copies in the first six months. Emancipator landed a Puma sponsorship, gave an interview to Rolling Stone Japan, discovered one of his songs was played at the Beijing Olympics (still trying to figure out how that happened) and his song “Shook,” a mashup that perfectly mixes Mobb Deep’s mighty raps with a haunting track from the Icelandic band Sigur Ros, become the highest-rated song on Hype Machine’s “Best 50 Songs of 2007,” and appeared on Hype Machine as the #2 most popular song in April 2009. Meanwhile, fans waited hungrily for the next album.
Emancipator’s new Album “Safe In The Steep Cliffs” blends new instrumentation and organic samples with the signature Emancipator style of clean production, silky melodies and addictive drums. Dense layers of choirs, horns, American folk instruments such as the banjo and mandolin, violin and some distinct Asian influences make for a playful but refined album built out of intricate tracks listeners can enjoy on as many levels as they want. Dance to it, chill out to it, immerse your mind in it starting January 19th 2010.1