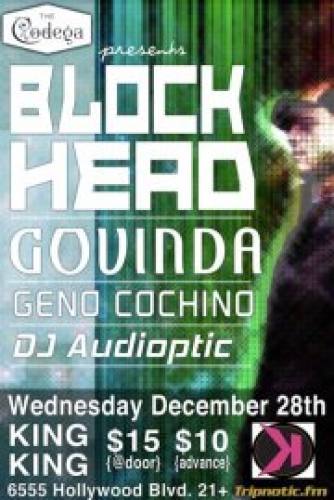 Blockhead grew up in downtown New York City. The son of an artist, early on he found his passion was for music. A fan of a whole range of sounds, especially hip-hop, Blockhead steadily built a tremendous collection of tapes and later CDs from innumerable artists. After a brief stint as a rapper, he realized his calling was behind the boards and not on the mic, and from there he began to produce beats.

Since making that decision, he's been kept pretty busy. Blockhead produced 9 tracks on Aesop Rock's critically acclaimed album Labor Days. Additionally he produced half the tracks on Aesop's follow up EP, Daylight. Blockhead has also been working with other indie giants such as Slug of Atmosphere, Murs, Mike Ladd and SA Smash. He also found time to complete a break beat album entitled Blockhead's Broke Beats, with 10 hard hitting instrumental tracks, which was released on Mush Records, the US home of cLOUDDEAD. And just to prove that he ain't all about art-rap, Blockhead produced 2 tracks on the newly crowned Skribble Jam Battle Champ, MacLethal's full-length album. Oh, and the guy does comedy, too. He's a member of the Party Fun Action Committee who's hip-hop/comedy debut album was recently released on the legendary Def Jux. And what was the other thing? Oh yeah, exquisite, emotional instrumental hip hop on the one and only Ninja Tune…

Govinda is the alter-ego of Austin based producer/composer Shane Madden. He began studying violin and composition at the age of eight and went on to study classical violin at the University of Texas where he fell in love with electronic music production. It was in Madden’s pursuit of his gypsy roots that he opened his ears to music from around the world. From experiences learning violin with mysterious masters on his journeys across the globe and his passion for modern design and technology, the current sound of Govinda was born.

Govinda has played with Thievery Corporation, Tipper, Bassnectar, Shpongle, Cheb I Sabbah, STS9 and many more and been featured on over 25 compilations such as Buddha Bar II, Asian Travels II, and Nirvana Lounge selling a combined 400,000 copies. Govinda has played at numerous festivals throughout North America including Coachella, Lightning in a Bottle, Sea of Dreams, SXSW and more. Govinda’s music has been licensed on shows like “Roswell” WB, “Road Rules” MTV, and “Queer Eye for the Straight Guy” Bravo as well as many independent films.

The Govinda live show is truly a multi-sensory experience that features professional dancers, live projections, resonating vocals and a sonical sound-scape. His live experience is full of vibrant energy that plays to its crowd. Govinda performs on Ableton Live accompanied by classical violin. Govinda is currently touring in support of his album “Universal On Switch” which was released independently earlier this year.

GENO COCHINO stepped into the dj/production scene in 2006 wielding a record bag full of an at the time unheard of genre that’s now taking over the globe, known as dubstep. His 6 year long love affair with the sound has led him to be recognized as one of the west coasts biggest ambassadors.

Whether playing the more up tempo dance floor side of things as Geno Cochino, rockin riddims alongside Hip Hop legend MYKA9, doing it deep and sexy as his alter ego SACRED G, or playing that future Purple gangster boogie alongside Paul Swytch (TRiLLBASS) in their dynamic duo SMOKEY AND THE BANDIT its always high energy, fresh, and cutting edge. He recently released two tracks he made on Hollowpoint records alongside Co Producer and label owner SPL. HOLY WAR, and UNION JACK have both seen dance floors globally and support from some of dubstep's key players. The last tune the two made together, MEDUSA was recently released on the legendary dubstep label SUBWAY recordings out of Holland on their much anticipated Destinations compilation with all three of the tunes charting in Beatports top 10.

Geno continues to push the scene in LA with his Monthly event WEST SIDE DUBZ at Zanzibar in Santa Monica.

He has also played at festivals such as Coachella, Lightning in a bottle, Manifesto gathering in Costa Rica, Shambhala in BC, Sonic Bloom,Symbiosis, Rain Dance, Emrg+ N+ See, and Burning Man as well as legendary west coast underground parties such as Space Island, Bassrush, Respect, Get Freaky, and Low End Theory. He has also shared the stage with some of the dubstep games biggest heavyweights such as RUSKO, CASPA, LOEFAH, HIJAK, L-WIZ, RESO, N-TYPE, MALA, BENGA, TRUTH and DMZ's legendary MC Sgt. Pokes.