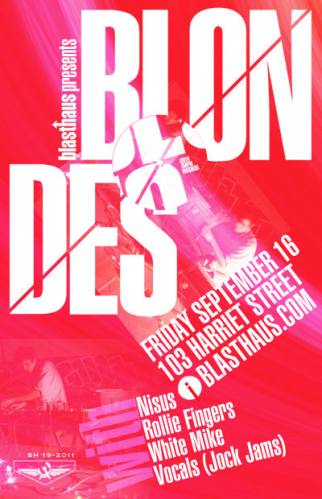 Blondes, return to SF for a performance not to be missed! The Brooklyn duo explains, "Our musical chemistry has always existed in the context of actually playing. From pre-written material in our old post-punk band to recent tracks that were completely improvised, it’s all about capturing music in the moment; all about hearing our hands shape samples, toy with our instruments, and turn tons of knobs.”  Blondes are one of many groups making music at the intersection of indie and dance, but they set themselves apart in many ways.  They are more rooted in dance music proper and rather than mixing styles, they build organic club music from the ground up using humble analog instruments. The result is shimmering electronic music, sparkling synths and depth charged bass.

While they developed a deep love for club-oriented music alongside many different bands at Oberlin College, Haar and his recurring creative partner, Zach Steinman, didn’t apply their collective skills to a studio setting until last year’s Touched EP. A restless snapshot of their earliest material—each with its own “internal logic and process”—the record was haunted by the ghosts in the machines of such sound sculptors as Manuel Göttsching, the Belleville Three, and DFA’s keyboard-collecting dark horse, Gavin Russom. Which explains why it featured a left field remix from Oneohtrix Point Never and earned the respect of discriminating dancefloors and blissed-out living rooms in equal measure.

As for what came next, Blondes avoided the allure of a rushed debut record for three separate 12-inch sessions: one at Atlantic Sound Studio on the brink of Brooklyn’s East River, and a pair of sparring matches in the group’s own rehearsal/recording space, where they can mold their music without worrying about time or money.

All of which up the ante of Touched’s transcendent techno tendencies while maintaining the flesh and blood feel of such early standouts as “Moondance” and “Spanish Fly.” Whether your needle’s pierced the runaway piano riffs of “Pleasure” or the speaker-panning synth pads and bruised beats of “Hater,” it’s easy to imagine Blondes’ new material working in such adventurous environs as New York’s Paradise Garage, one of David Mancuso’s infamous Loft parties, or a particularly epic house party on the very outskirts of Brooklyn.

No wonder why Blondes made a conscious decision to release its RVNG Intl. trilogy on vinyl first, with a long player pressing of all six tracks and a handful of freshly-cut recordings on the way later this year.
About | Advertise | Contact | FAQs | Terms of Use | Privacy Policy | Accessibility Policy © 2022 - TheUntz.com. All rights reserved.