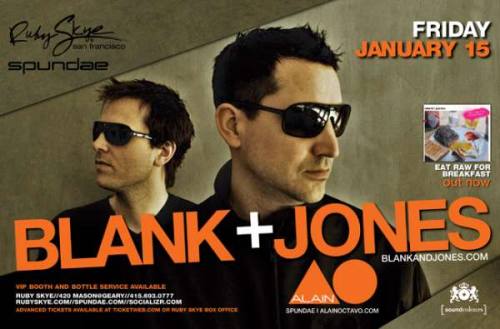 Ruby Skye & Spundae Present
BLANK & JONES
Friday, January 15
It's been exactly 10 years now that the world's famous DJ Mag wrote these words about Blank & Jones:
"...two German trance-meisters who clearly believe in eating raw meat for breakfast..." (DJ MAG May 1999)
Over the past decade, the two producers have released 10 artist longplayers, more than 20 singles (all of them charted inthe Sales Charts) and also founded their very own label SOUNDCOLOURS plus set up their own music publishing. So theyare totally independent in the music industry. The new Album "Eat Raw For Breakfast" was made under the impressions of their recent tour in Australia and NewZealand. They were requested for this amazing show called "Boombox" which set new standards in stage design andvisual effects. When Piet and Jaspa saw the first scetches and animated ideas for this tour, they knew that they wanted to create a special sound for this incredible show. So within 2 months they recorded all songs on this album and had the focuson Club Music and Nightclubbing only!
The result is a new sound that totally rocked the tour and showcases perfectly what Blank & Jones sound like in the clubtoday! It is mixed non stop to bring the perfect flavour to your ears.The artwork is another masterpiece which shows their passion for modern art. After they worked with the legendarydesigner Emil Schult (who designed all artworks for Kraftwerk as well), on their "Monument" album, they now had a master
student of no other than Gerhard Richter to design the artwork for the new album. Frank Bauer is famous for his photo realism and created a very unique and outstanding cover art which goes perfectly with the music. 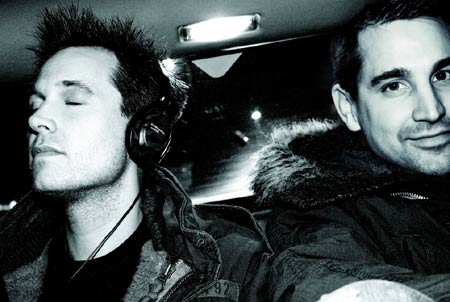