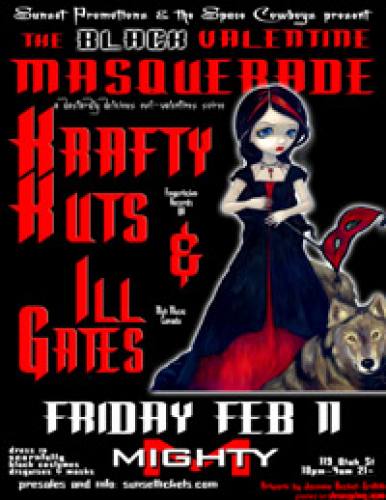 Sunset Promotions & the Space Cowboys bring you the 4th edition of the Black Valentines Masquerade. We are extremely excited to have reknowned UK electronic producer and turntablist extraordinaire KRAFTY KUTS along with Canadian phenom ILL GATES.

Internationally renowned breaks DJ/producer Krafty Kuts is the co-founder of the label Against the Grain and has a long list of albums, EPs, and remixes to his credit. Born Martin Reeves and based in Brighton, England, he began DJing at a young age, developing his turntablist skills during the mid- to late '80s. He later worked at a record shop in Brighton and began producing his own tracks. Reeves made his recording debut as Krafty Kuts in 1998 on the Ministry of Sound big beat offshoot label FSUK with the EP Funky Elements. Around this same time, his track "Gimme the Funk" had been championed by Fatboy Slim, who ultimately released it on his Southern Friend Records label in 1999. These initial productions drew attention to Reeves' talents as a DJ, and so he teamed up with fellow breaks DJ/producer Lloyd Seymour (aka Skool of Thought) to form the long-running club night Supercharged. He also released his first mix album, Slam the Breaks On (1999), via Lacerba, and it proved so successful that he released a second volume a year later.

In 2001 Reeves and Seymour furthered their partnership by founding the labels Against the Grain and Supercharged, the former of which was inaugurated with a pair of Krafty Kuts EPs (Lost Plates, Lock the Hype/Smash Your Breaks). Also in 2001, Reeves made his Finger Lickin' Records debut with another pair of EPs (Finger Lickin' Funk, Vol. 1, Dangerous). He later released the full-length album Tricka Technology (2003), a collaboration with A-Skillz, on Finger Lickin' Records. Meanwhile, he continued to showcase his talents as a DJ on mix albums including Fuzzy Breaks, Vol. 1 (2002) and These Are the Breaks (2003), and his live performances earned him a series of Best DJ awards (2004, 2005, 2006) courtesy of /Breakspoll. Reeves continued his output in subsequent years, releasing the full-length Krafty Kuts album Freakshow (2006), which spawned the club smash "Bass Phenomenon." Plus, there were more mix albums, including entries in the long-running Fabriclive and Back to Mine series in 2007 and 2008, respectively. Jason Birchmeier, Rovi

ill.Gates is a Toronto-based composer, performer and educator. Over the past 15 years, he has established a global fanbase and a reputation as one of the most dynamic electronic music artists around. He regularly tours across North America, Europe, Australia and Asia. Gates has headlined at such festivals as Burning Man, Shambala, the World Electronic Music Festival and the New Orleans Jazz Festival.

His first full-length release, Autopirate (Muti Music, 2008), reached #1 on many esteemed charts; and continues to sell strongly. Many of his contemporaries cite Gates (aka The Phat Conductor) as a key artistic influence and inspiration in their music. While on tour, Gates frequently teaches workshops to grateful and attentive audiences, in which he shares his highly effective approach to producing quality finished music as well as insights into the mentality and strategies necessary to succeed in the music business.