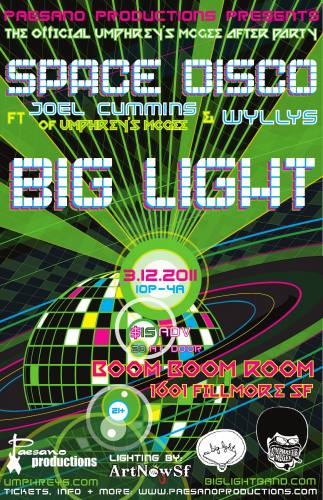 and Wyllys plus Special Guests

THIS EVENT WILL SELL OUT!

Paesano Productions is extremely excited to announce part one of the Official Umphrey's McGee SF After Parties, Saturday, March 12, 2011 at the Boom Boom Room in San Francisco from 10pm to 4am. What started as a dream has become a reality. For one special night, some of the best touring musicians in the U.S. will join forces with one objective, blow your minds! The first half of the evening, SF's Big Light will take the reigns, setting the bar high. Space Disco takes the stage next to close things out and get extra funky. You can expect some friends to stop by for both sets so make sure you don't miss a minute of the action.

SPACE DISCO started on the East Coast when Wyllys wanted to play Nu Disco out in clubs but needed more texture added to the grooves. A keyboard player was added to the mix and the idea began to grow. Space Disco combines all the sexy and deep elements of House, without having to resort to the played out Electro bangers so many DJs need to raise the energy in their sets.

For this extra special, West Coast edition of Space Disco, Wyllys brings in his old friend and accomplished keyboard player Joel Cummins of Umphrey's McGee to the fray. With Joel's seemingly endless array of sounds on the Moog and his proven chops on the stage piano, Space Disco has the potential to break new ground and really push the boundaries of the dance floor. Expect a West Coast feel to all the grooves, and a very psychedelic tinge to every mix. Also be on the lookout for special guests. You never know who is going to walk up and contribute to the madness.

BIG LIGHT is a rock band from San Francisco. Formed in 2007 as a vehicle for singer/guitarist Fred Torphy to get his songs into the world, the band achieved instant recognition and legitimacy with the early addition of bass player Steve Adams. A fixture in the Bay Area music scene and founding member of pop/rock jam stars ALO, here Adams gets to flex his rock & roll muscles. “I’m definitely turning my amp up and using more fuzz” he says. “One thing I really love about Big Light is its true garage rock sound. It's gritty in all the right ways” continues Adams.

Inspired by contemporary bands like My Morning Jacket, The Slip, Dr. Dog and Wilco, more than specific stylistic similarities, it’s a mindset that Big Light shares with these acts. “We’re always looking to keep things as sonically interesting as possible” says bandleader Torphy. “But it all needs to come back to serve the song.” In other words, Big Light is catchy enough to land on the radio but adventurous enough to engage those who refuse to listen to it. And when it comes to the live show, anything goes; so don’t be surprised to see kids singing-along one moment and freaking out to a ten-minute jam the next.