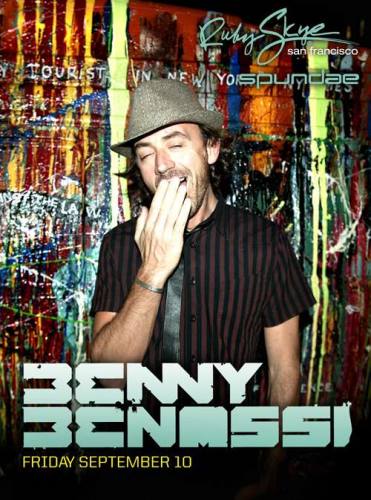 
Benny Benassi was born in Milan in 1967 and then grew up in the provincial town of Reggio Emilia, Italy. He started dj-ing when he ws still at school and has been producing with his cousin Alle Benassi for about ten years at Off Limits studios. His first as a producer was with the track I feel so fine by KMC feat. Dhany which went to n°1 in the UK club charts in 2001. The following year, working under the BENNY BENASSI presents THE BIZ trademark, Benny and Alle came up with Satisfaction and in one fell swoop ravaged the dancefloors and dominated sales charts round the world. The album “Hypnotica followed. In the meantime Benny and Alle produced more melodic dance music under the Benassi Bros. banner. The charts of half the planet gave them thumbs up.

The Benassis have also remixed artists such as Outkast, David Guetta, Moby, Goldfrapp, Paul Oakenfold, Faithless and Public Enemy, to name but a few.

Benny has won tons of prizes and awards around the world and continues to tour the five continents with his unique style, once described as electro, sort of house-tec, dirty and cool, sweaty and smooth.

In 2008 Benny and Alle won a Grammy Award for his remix of Public Enemy’s “Bring the noise”.

His own productions are released through Energy Productions in Italy and Ultra in U.S.A. At the same time, Benny talent scouts for his own brand new label, Pump-kin, designed to create space for young djs and producers of electronic club music.