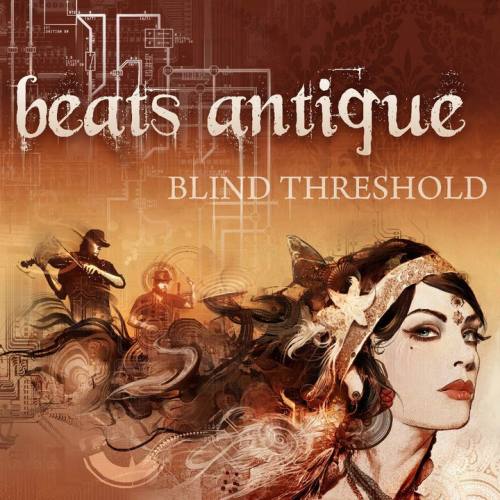 Beats Antique came together to make music for Miles Copeland's Bellydance Superstars extravaganzas. The trio is composed of David Satori (guitar, saz, viola, and percussion), Sidecar Tommy Cappel (keys, toy piano, drums, and percussion), and Zoë Jakes (belly dancer, composer, and arranger). Their music incorporates Middle Eastern grooves, Balkan wedding music, flamenco, French Gypsy jazz, hip-hop, dub reggae, and other Eastern tonalities, all pulled together with electronica that won't put off club kids, but will appeal to world music lovers as well. All of the bandmembers have a long history of innovative music-making behind them.


David Satori was born in Burlington, VT, on June 6, 1979. He started playing guitar at the age of 12 after hearing his brother Michael pick up the instrument. At 17 he was playing with an experimental high-school garage band called Bubble Tribe while attending Burlington High School. His brother Mike played bass, he took up drums, and the lead instrument was an electric banjo played by a neighborhood virtuoso who was interested in exploring the odder sounds the instrument could make. When he was older, he picked up his grandfather's violin to learn Gypsy fiddle music as well as Indian and Middle Eastern styles. He discovered a connection between the music of North Africa and Mali, which fed his curiosity for world music.


After high school, Satori attended the California Institute of the Arts near Los Angeles and earned a B.A. in music performance and composition. There he was exposed to more world music, and during his last years at CIA he founded an experimental instrumental quartet called the Funnies. They toured in an "eco-bus" that ran on recycled vegetable oil, and they put out two albums, The Funnies and Masters of the Universe. In 2003, Satori moved to San Francisco to joined the ten-piece Afro-beat ensemble Aphrodesia. He toured the U.S. with them and was part of their epic trip to Nigeria, traveling West Africa in another eco-bus. The trip culminated in a performance at the New Shrine in Lagos, built by Femi Kuti, son of legendary Afro-beat progenitor Fela Kuti. Kuti sat in with the band and inspired its 2007 album, Lagos by Bus, which Satori produced.


In 2007, Satori was in L.A. again dating belly dancer Zoë Jakes. She introduced him to Miles Copeland, her boss at the Bellydance Superstars show. Satori produced the music for an instructional belly dance DVD by Rachel Brice. Copeland was impressed and asked about an album of modern belly dance music. Satori suggested a fusion of electronic experimental music and traditional belly dance tunes. Copeland gave him the green light and Beats Antique decamped to a recording studio to produce their first album, Tribal Derivations. Jakes knew Sidecar Tommy from the Yard Dogs Road Show, a traveling hippie circus, and brought him into the band.


Tommy Cappel was born in Fairfax, VA, in 1973. Both his parents were music teachers, so he grew up surrounded by music. His brother played drums to heavy metal records. Cappel was driven by the beat and eventually took over his brother's drum kit. By age six he was playing in a rock band with his friends, and in high school he picked up piano, percussion, marimba, and timpani. He added his father's jazz records to the collection of prog rock LPs he borrowed from his brother to expand his musical vocabulary. When he discovered the funky New Orleans rhythms of the Meters, he knew he was going to be a musician for the rest of his life.


In the '90s, Cappel attended the Berklee College of Music in Boston, aiming for a degree in studio drumming. He studied New Orleans jazz, bebop, modern jazz, and world music. One of his teachers was transcribing African and Arab drumming patterns to drum kit and Cappel lent a hand and learned much about non-jazz rhythm patterns. He started digging into hip-hop, Balkan music, Arab music, and Latin rhythms. After graduation he moved to New York and played in rock, jazz, reggae, and jam bands. He attended the free music jams at the Bell, a café in downtown Manhattan frequented by people like Karsh Kale and the members of Bill Laswell's gang. This led to experiments in combining live music with hip-hop and dub reggae effects. When a group of musicians he knew moved out to San Francisco, he joined them. In San Francisco he began producing hip-hop artists and electronic dance music. He joined the the Yard Dogs Road Show and hit it off with Jakes, who invited him to join Beats Antique.


Tribal Derivations was produced to complement Jakes' unique dance style, an innovative blend of traditional and tribal belly dance with tango, break dance, and Indian dance. On Collide, the trio stretched out in other directions. The San Francisco scene is a hotbed of cross-pollinating multicultural ensembles and the band ranged far and wide across North Africa and the Middle East for inspiration. Musicians from the Balkan punk band Brass Menazeri added delirious horn parts to complement a mélange of French Gypsy jazz violin, flamenco handclapping, Romanian wedding music, hip-hop, jazz, dub reggae, and more. They started laying down tracks for their next album in early 2009, and with a name like Beats Antique they're only limited by their imaginations. The band says that ragtime, Hawaiian, blues, and other archaic musics are all liable to find their way into future releases.

The Yard Dogs Road Show is a hobo cabaret, a living patchwork of vaudeville and rock and roll. In the enchanting land of stage show entertainment theirs is both pleasant and formidable terrain. They require a sensitivity to the subtle and the absurd. They lead the modern hobohemian on a visual and sonic journey through part of history that may or may not have existed – followed by an ambitious return to the emotional challenges of our punch-drunk contemporary world. It’s a true story on stage: sword swallowers, dancing dolls, fire eaters and sunset hobo poetry - all animated by the live sounds of the Yard Dogs cartoon heavy band. Yard Dogs Road Show is pure visual and sonic voodoo.


Born from the saloon vaudeville that toured the Wild West in the late 1800's and slammed into the underworld of modern American road culture. The Yard Dogs create a timeless space for the union of ancient theatrical alchemy and modern pop culture.


There is some speculation as to the origin of all this. Not for the want of mystery but for the difficulty in translating an experience that was navigated by the overly-romantic and sleep deprived. Shows came and went leaving very little time to fully comprehend what was going on. Some say the carnival-inspired performance art of the Yard Dogs Road Show began as a three piece jug band performing in road houses and dance halls and at informal gatherings, including Oregon’s modern day acid tests with Ken Kesey and The Merry Pranksters. Some say they traveled in a 1967 Ford Galaxy 500 and the evolution of their show revealed itself in the flames of a campfire on Dog Creek Road: dancing dolls with feather fans, an hombre in silver sunglasses eating fire, a dreamy guitar boy with golden locks, a bearded swami capable of conjuring the supernatural . Others say this story is complete hogwash and it was actually the brainchild of a unemployed “cowboy” and his faithful muse – transient artists with an incredible talent for brainstorming impossible ideas while under the influence of poppy tea and wishful thinking. By chance these conversations were overheard by an ambitious young poet who decided to actualize them for the sake of all impossible dreams everywhere. When the three finally immerged from their stupor they realized that they were in show business. An almost homeless lifestyle sprinkled with moments of outstanding glory and recognition. But mostly uncertain days. The only thing they could rely on was the fact that there would always be glitter under their fingernails and confetti in their bed. Truly a life of horseshit and confetti.


Either way, that was eight years ago, and the unlikely troupe of gypsies has been performing on stages ever since.


In an historical sense we are a family run show. We endeavor to operate a values based entertainment business that sustains itself on pure democracy and creative collaboration. The Yard Dogs are a naturally occurring phenomenon - favored by those seeking an unsullied entertainment experience. We are continually working towards a refinement of showmanship and musicianship while simultaneously finding creative ways to embrace our community and the forever present unexpected.


We have many plans that require many miles. Some say the show will settle down, maybe in your town – in a small theater or even under canvas - just long enough to flatten the grass and feed the baby. Whatever the future holds we want you to be there, dressed in your finest masquerade. Now is the time to alter the course of our journey and we hope that you will be there to witness the charade.