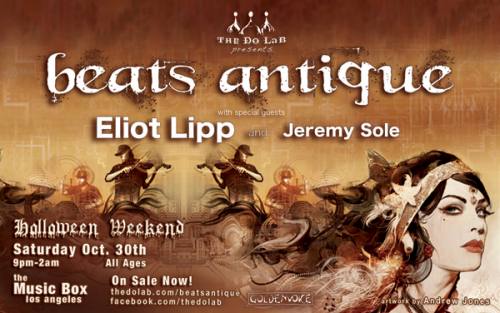 What: Beats Antique and Eliot Lipp @ The Music Box

"From under the shelter of world acoustic music’s canopy, live electronica has bred a new beast built of brass band and glitch, dubstep and glockenspiel: the musical trio Beats Antique."

Join us on Halloween Weekend for a very special night of Music featuring:

It all goes down on Saturday October 30th at the elegant Music Box in Los Angeles.

Tickets are on sale now:

Since the group’s conception in the wild underground of San Francsico’s performance art scene, Beats Antique has been notorious for making it nearly impossible to sit still. They meld their mediums as attentively as they fuse the cultures that inspire their sound. The trio create a unique collage: an animalistic, raw musical event that blurs the lines between the provocative, the spiritual, and the artistic, while still maintaining an allegiance to the muses of class and beauty.

David Satori and Tommy Cappel both trained classically before venturing to locations such as Bali, West Africa, and Serbia. With extensive backgrounds in multicultural music production, and the passports to prove it, Satori and Cappel command the spectrum of live and digital instrumentation. The musical alliance of producers David Satori and Tommy Cappel is inspired and emphasized by their collaborative partnership with world-renowned belly dance performer and music producer Zoe Jakes. Zoe Jakes adds a third dimension as the multi –cultural and –disciplinary dance counterpart to Beats Antique’s sound.

Beats Antique is best imagined as an innovative creature built from the cumulative heritage of the world’s music chasing its tail.

For the past 20 years, Chicago-born Jeremy Sole has been making beats since the MPC 60 was born, deejaying since rotary crossfaders were the standard, and playing clubs since he was too young to (legally) get in.

As a teenager, Sole's underground loft parties were packed with sweaty bodies - a culture clash at the birth of Hip Hop and House music. “When I was young, I spent many a night in the alleys behind blues clubs, listening to cats like Buddy Guy through the air vents. Those same nights I would be mixing with legendary Disco deejays at our downtown loft parties." Since then his obsession grew to include music from around every corner of the world.

Jeremy's list of accomplishments is incredible. They include being the co-founder of Afro Funke' 7 years ago, to sharing the stage with Sly Stone, Roy Ayers, Ben Harper, Stevie Wonder, and he was the last DJ to open for Ray Charles and the 1st to DJ for Barack Obama's victory celebration. If that wasn't enough, for the last 3 years, he has been hosting a show on the LA based radio station KCRW.

Costumes? We ENCOURAGE everyone to dress up. We've even got a costume contest. "What if I don't like to dress up for Halloween?" That's fine, just dance twice as hard!

Tickets are now on sale here: