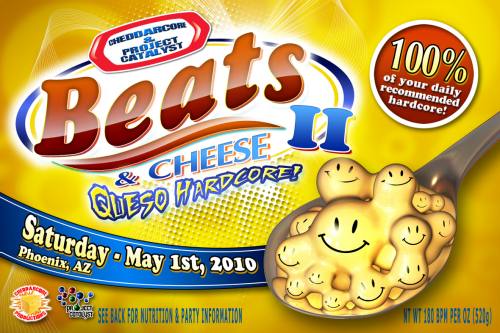 Beats & Cheese II - Queso Hardcore
5.1.2010
Noize Suppressor *LIVE* – Italy
[Noize Records / Masters of Hardcore / D-Boy]
This Italian hardcore junkie -- also known as Alessandro Dilillo (DJ Bike) – has always loved the hard sounds.
Bike, the producer behind Noize Suppressor and the label Noize records, started to play in 1988. He bought a Roland TR-909 and a Roland TB-303 and experimented with these devices. After a couple of years he sent different demo’s to record labels. Someone noticed the talent in an early stage: he got offered a contract by Digital Boy from the infamous Italian label D-boy Records. In 1996, Bike finally got his first release, which featured the key to his later success: one of the tracks on the EP contained a distortion from a very special guitar: the Noise Suppressor. A new name was born...
After collaborating for five years with A.C., Alessandro moved from the Italian capital Rome to party-city Rimini. From that moment on, Bike joined forces with Rudy B, who was also called ‘the scratchmaster of Noize Suppressor’. But Alessandro was not just a producer like everyone else: he also started organising big parties together with Digital Boy in the Rimini-based club Gheodrome. In this way, Alessandro got credits for keeping the Italian hardcorescene alive in many ways.
In 2004 Noize Suppressor scored some of the biggest hits: “Bonecrusher”, “Wash Machine” and the major remix of Darkraver and Dj Vince’s “Thunderground” all turned out to be massive dancefloor-smashers. In 2006, the highly-rated second album “Hardcore Junky” was dropped. Also, Bike started his own label: Noize Records. It turned out to be very successfull after five vinyl-releases and a Noize Suppressor album.
Their popularity went skyhigh due to their energetic live-performances. Both Alessandro and Stefano lose control when they start playing and keep pushing the boundaries of their gear to the limit. Noize Suppressor has crushed every imaginable hardcore-stage: Masters of Hardcore, Thunderdome, Mystery Land and Dominator are just a few examples of parties that were lifted to a higher level due to the unlimited energy of these Italian madmen
Noize Suppressor -- Live at Qlmax 2009 - Holland - H.D. Video
YouTube - Qlimax 2009 - Blu-Ray - DVD preview 10 of 10 Noize Suppressor
Luna-C - England / U.S.
[Kniteforce Revolution]
Brilliant madness on the turntables, electronic renaissance man. Considered one of the most brilliant DJ's in the world. Luna-C is the creator of distinguished Kniteforce Records and has been producing and releasing records for more than fifteen years. You never know what to expect when he is in control! Sure to bring epic smiles and random outbursts of giddyness.
Local Lineup!
MayheM vs. NexOne -- Dutch Hardcore 2x4
K.O.R.E. vs. Cytheria -- Dutch Hardcore 2x4
Mando
Frequency vs. Phox -- Hardstyle 2x4
Rize vs. Skeltaboy -- U.K. Hardcore 2x4
Sam Groove vs. Ballistic Ali -- U.S Hardhouse 2x4
Featuring the debut of Arizona's newest and hardest production company.... Project Catalyst!
About | Advertise | Contact | FAQs | Terms of Use | Privacy Policy | Accessibility Policy © 2022 - TheUntz.com. All rights reserved.