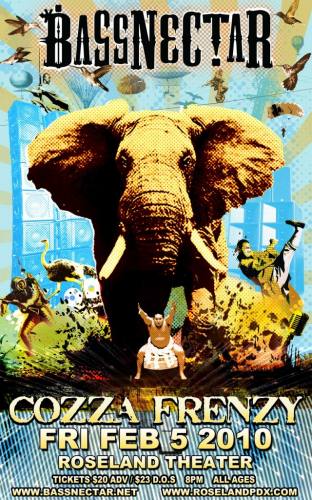 What: BASSNECTAR AT THE ROSELAND THEATER

BASSNECTAR:
What started back in the mid nineties as an experiment fusing youth culture and social action has turned into a multi‐faceted, multi‐faced creature called Bassnectar. It is the brainchild of Lorin Ashton, and it exists as an open‐sourced musical project that is as diverse as it is heavy, as raw as it is meticulous, and as fierce as it is imaginary.
Bassnectar combines sound and force with weight while spanning the spectrum of sonic style, covering every genre imaginable, and smashing it all into a collision of wobbling, perverted basslines, hypnotic hide‐and‐seek adventures, and pretty much anything that strikes his fancy.He calls the end product “omnitempo maximalism,” which basically means no rules, no limitations, and no hesitation in fusing the familiar with the strange or the classic with the cutting edge.
Whether remixing, collaborating, writing, DJing, performing live or working on constant social networking, Bassnectar’s music is the lure and social impact is the very sincere intention. According to Ashton, “we are so blessed, and so deeply fortunate to be alive and awake right now…it’s a basic truth, but it’s very powerful. I think privilege confers responsibility, and Bassnectar is a reflection of that opportunity to give back; the motion of my cells bouncing back at the world.”
Idealistic? Maybe. But with wall‐to‐wall shows night after night in city after city, with endless music being concocted and pumped out of the labs by a growing legion of collaborators and bass‐scientists, and with an ever‐growing fan base of loyal bass‐freaks on the loose, maybe idealism isn’t all that bad…
EMANCIPATOR OPENS