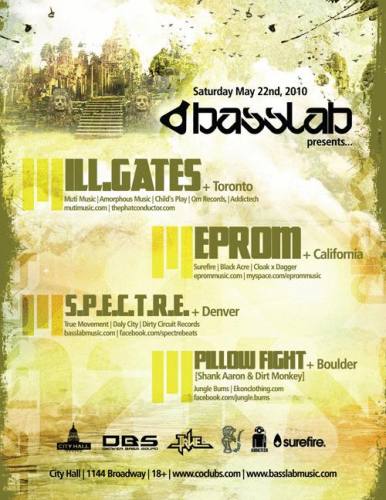 BassLab is back again with another dose of the worlds finest glitch-crunk-whomp-step-hyphy beats. We strive to showcase the cutting edge sounds of the emerging mid-tempo breakbeat scene in an up-close and intimate atmosphere. Please join us for a night of cutting edge sonic wizardry and low-end hedonism at its finest.
Saturday May 22nd, 2010
BassLab presents -
ill.Gates - http://mutimusic.com - http://thephatconductor.com
[Toronto][Muti Music, Amorphous Music/Child's Play/Om Records, Addictech]
ill.Gates is a Toronto-based composer, performer and educator. Over the past 15 years, he has established a global fan base and a reputation as one of the most dynamic electronic music artists around. He regularly tours across North America, Europe, Australia and Asia. Gates has headlined at such festivals as Burning Man, Shambala, the World Electronic Music Festival and the New Orleans Jazz Festival. He also has cultivated a thriving creative partnership with the San Francisco-based bass music icon Bassnectar, including a chart-topping remix of 'Maximum' by DJ Vadim that sold so fast the duo were accused of chart hacking. Please welcome ill.Gates back to Denver for another mind blowing bass fueled performance!
EPROM - http://eprommusic.com - http://myspace.com/eprommusic
[California][Surefire, Black Acre, Cloak x Dagger]
EPROM is known for his diverse, funky and energetic sets, which cross the lines between live remixing and manipulation of hip hop and dubstep with his own obscenely bass-heavy neurocrunk transmissions. EPROM has played alongside artists like Flying Lotus, The Glitch Mob, Skream, Lazer Sword, Kode9, Mochipet, Rustie, and many others. EPROM has worked with internationally renowned MCs and has slated multiple vinyl releases in the coming year. DJ supporters include Starkey, Jakes, Bassnectar, The Glitch Mob, Rustie, Megasoid, Zombie Disco Squad, Riton, Basement Jaxx, and BBC Radio One's Mary Anne Hobbs.
S.P.E.C.T.R.E. - http://basslabmusic.com - http://facebook.com/spectrebeats
[Denver][BassLab, True Movement, Daly City, Dirty Circuit Records]
S.P.E.C.T.R.E. brings a diverse mixture of bass heavy music combining glitch hop, dubstep and beyond with a flare for the unexpected. His seamless blending of styles and tempos and on the fly mash-ups has made him a crowd favorite in Colorado. Co-founder of the BassLab crew, S.P.E.C.T.R.E. has built a large following from the infamous Jungle Labs warehouse parties, regular nights at Denver’s Beta Nightclub, and his mixtapes on the Temporal Fusion podcast. Recently S.P.E.C.T.R.E. has signed with Propa Tingz' True Movement label and released the Bad Girls Go To Hell EP which is currently in the top ten charts on addictech.com.
Pillow Fight (Shank Aaron & Dirt Monkey) - http://facebook.com/jungle.bums
[Boulder] [Jungle Bums, http://Ekonclothing.com]
Venue -
City Hall Amphitheater
1144 Broadway
Denver, CO 80203
http://www.coclubs.com
18+
9pm-2am