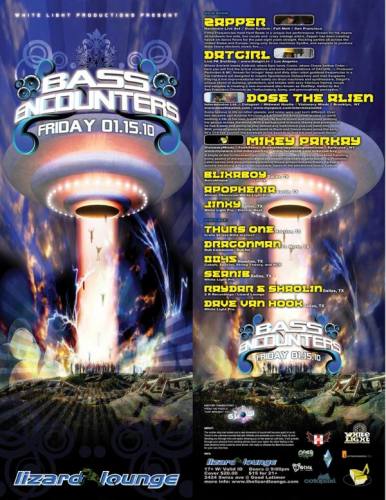 White Light Productions
(The people who brought you GLOW)
Presents:
BASS ENCOUNTERS
The mother ship has landed and a new dimension of sound will become apart of us all.
Travel to the unknown sounds that will infiltrate and penetrate your mind, body, and soul.
Sending you through time, and space allowing you to feel what we call bass.
It will pulsate through your physical form sending shivers down your spine.
No other feeling in the Meta physical world could be more divine.
Get ready to witness the Bass Encounters for your very first time.
(This will be another themed event brought to you by White Light Productions that will include 2 areas of music and deco. There will be several out of state DJ’s including 3 Live P.A. Performances. Backed up by some of Texas’s best local and regional DJ’s)
Main Stage
Zapper (San Francisco, California)
Hardware Live Set
Filthy Frequencies meet Hard Beats in a unique live performance. Known for his insane all hardware live sets, live vocals and crazy onstage antics, Zapper has been creating havok on dance floors for the past eight years straight. Rocking parties all across the United States and Europe. Using only Drum machines Synths, and samplers to produce Bass heavy electonic music live....
Dose The Alien (Brooklyn, New York)
Some believe in life on other planets, and some were just born different. Over two decades ago Andrew Kirchner a.k.a. Dose the Alien crash landed on earth seeking a life of his own. Lucky for us, He found music and continues pushing his genius across the world. With a background in music theory and production he has a taste and ability to play almost any instrument you can hand him. With years of piano training and roots in Rock and Dance music since the early 90's D74 has pushed the envelope of his sounds to find his own unique flavor
DATGIRL (Los Angeles, California)
Live PA SlutStep
Where Ancient meets Android, where Epic turns Comic, where Chaos battles Order::: here you will find the lyrical creations and sonic manipulations of DATGIRL -- Producer/Performer & MC, known for bringin’ deep and dirty alien robot goddess frequencies in a live hardware set designed to inspire Spontaneous Debauchery and mad Eargasms.
Playing a live improvisational set solely on drum machines and synthesizers, Datgirl’s unique blend of dubstep, ghettotech, and breaks with sexy hilarious hiphop vocals and samples is creating a new movement also known as SlutStep. Hailed by the San Francisco Chronicle as “hallucinatory, funny, and provocatively perceptive,” Datgirl’s music and comedy performances can be found on-line at
Mikey ParKay (Syracruse, New York)
A staple of the northeastern electronic music scene, Mikey parkay has been handling every aspect of the electronica music community since his early teens. Dj, Promoter, Label owner, and also currently studying music production and theory Parkay is quickly becoming a highly recognizable figure in the electronica music culture.
Blixaboy (Dallas, Tx)
Live P.A.
Jinxy (Dallas, Tx)
Apophenia (Austin, Tx)
Video Bar
Dragonman (Ft. Worth, Tx)
Thursone (Houston, Tx)
SeaniB (Dallas, Tx)
0045 (Houston, Tx)
Raydar & Shaolin (Dallas, Tx)
Dave Van Hook (Dallas, Tx)
Info:
20.00 @ Door // 15.00 For 21+
Limited 10.00 Pre Sales avaible
(If you want pre sale tickets please contact us threw the link below)
whitelightdallas@gmail.com
For more information please click the link below
http://www.myspace.com/wlpinfo
About | Advertise | Contact | FAQs | Terms of Use | Privacy Policy | Accessibility Policy © 2022 - TheUntz.com. All rights reserved.