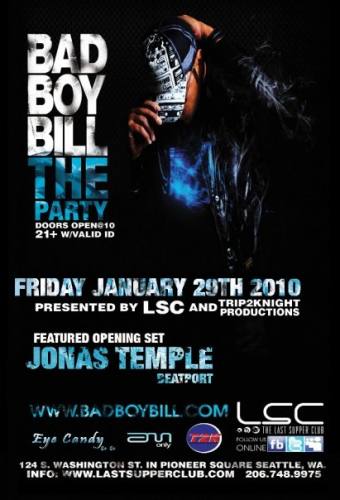 Trip2Knight Productions and The Last Supper Club Present:
Bad Boy Bill "The Album" Tour
With supporting DJ's:
Jonas Temple -beatport.com
Hurley -Trip2Knight
Elevate -Trip2Knight
Advance $10 tickets on sale now at:
http://www.brownpapertickets.com/event/94030
For VIP and Table reservations email: events@lastsupperclub.com or call: Darcy at 206.748.9975
And in the Lower Level, Imperial VIP presents:
The Clockwerk Crew aka DJ's Cide & Tre
spinning Top 40, Mashups and Hip Hop
Bio:
To call Bad Boy Bill accomplished would be a bit of an understatement. Voted America’s Favorite DJ (BPM Magazine). Winner of URB’s Massy Poll. Co-founder of Beatport.com, the leader in electronic dance music downloads. That might be enough success for some, but not for this world-renowned DJ. With over two decades of DJing under his belt, Bad Boy Bill is ready to release his first full-length artist album.
“I think people are going to be surprised because its different than what they probably expect from me,” says Bill. “And I like that.”
Out July 28, Bad Boy Bill The Album (Nettwerk) packs a double punch: the impressive collaborators we anticipate from an industry vet (Duran Duran’s John Taylor; Alyssa Palmer; JJ Flores; Steve Smooth; Alex Peace), combined with unexpected self-aware lyrics and unique production that seamlessly weaves Bill’s electronic edge into rock, hip hop, and rap.
While most of the tracks on The Album have been closely guarded secrets, Bill has previewed lead single “Falling Anthem” extensively, to rave reviews. Number 9 on the Billboard Dance Chart and steadily climbing, the track features vocals by the talented producer and singer Alyssa Palmer, and has already been remixed by Herve, Harry Choo Choo Romero, and Sylvane.
Now an international house icon, Bad Boy Bill got his start as a teenager, DJing at local parties, entering DJ battles, and throwing his own events. He won the first DJ battle he entered. As a senior in high school, Bill started his own record label (International House Records) and signed tracks from DJ Pierre, Mr. Lee, and others. Between 1995 and 2001, Bill released five volumes of the Bangin’ The Box series on his own label, Mix Connection Multimedia. It became one of the best selling series in dance music history. During that time, Bill also founded Moody Recordings, which released the international hit “Get Get Down” by Paul Johnson.
In 2003, Bill shook things up with Behind the Decks, a full length Mix CD + Mix DVD containing visuals from him live show. Bill took it to another level in 2006 with his follow up project, Behind the Decks Live, which captured the live show that has made Bill a favorite in a full length DVD and Mix CD.
This summer, Bill will surprise longtime fans and attract droves of new ones with his first full-length artist album, introduced by the first single, “Falling Anthem.” The mid-tempo dance track is propelled by a sparse and steady driving beat, but the real focus is on the gorgeous, plaintive vocals from Alyssa Palmer.
Featured on “Do What U Like” as well, Palmer helps set the tone for an upbeat, positive album. “Do What U Like” has all the makings of an instant club hit: funky and futuristic with slick production, racing rhythm, and robotic, commanding vocals.
With “Fast Life” (written on his cell phone via text at 6am in an airport) Bill takes advantage of a perk of recording your own music: lyrical catharsis. “I definitely think it is a fast life we DJs live,” says Bill. “It’s kind of never ending. It’s always another city and club every week. I have been travelling this way for over 12 years, and when I look back, its like ‘Wow, it flew by.’ But being able to do what you love is a gift, when you combine them all, that’s my life and I love it.”
Alex Peace slings staccato lyrics like “nonstop fast life / different city every night / no sleep late night” over jagged and fuzzed electro beats that start and skip at random intervals.
Exercising artistic license, Bill taps into his love for and knowledge of an array of musical genres, from rock n’ roll (“Got That Feeling”) to rap (“Headlock,” “Honey”). He goes back to where it all started with a cover of Herbie Hancock’s “Rockit” (“because of the scratching, it really got me into the art of DJing,” Bill says), and gives new life to a ballad by speeding up one of Palmer’s stunning songs (“If I Tell You”).
From start to finish, Bad Boy Bill The Album is everything you would hope for from a genre staple looking to shake things up: adventurous, experimental, fresh, and yet authentic with Bill’s signature electronic edge layered into every track. America’s Favorite DJ may just be America’s New Favorite Artist.