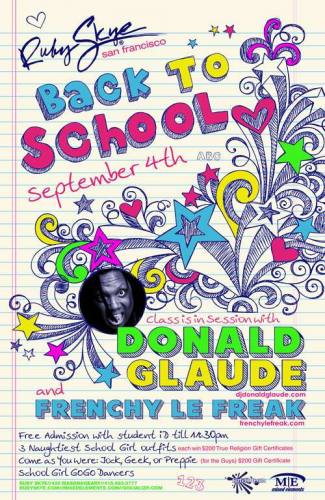 What: BACK TO SCHOOL with DONALD GLAUDE


BACK TO SCHOOL with DONALD GLAUDE


Free Admission with student ID till 11:30


Come as You Were: Jock, Geek, or Preppie (for the Guys) $200 Gift Certificate


Class is in Session and Donald Glaude is the instructor


Confident. Exuberant. Raw. Innovative. These are just a few of the words industry insiders and fans have used to describe the talent behind one of America’s favorite house DJs, Donald Glaude. Ranked #68 on DJMag.com’s Top 100 DJs List in 2005, Donald skyrocketed to #48 this year and his genius keeps on growing…