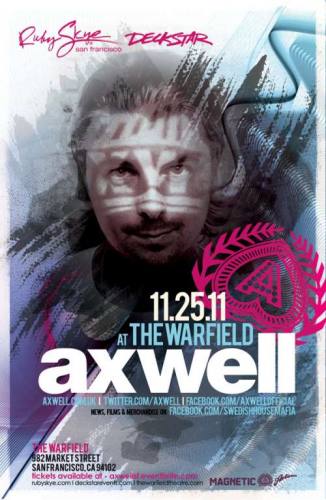 What: Axwell @ The Warfield


The king of the sun-kissed summer anthem; the mogul behind one of the hottest imprints on the planet; a superstar DJ who’s never lost the giddy enthusiasm of a fledgling clubber; and arguably the most successful and influential remixer of the 21st century. By anyone’s standards, Axel ‘Axwell’ Hedfors is a giant of modern-day dance music – and he’s only going to get bigger.


Axwell’s steady ascent into clubland aristocracy began back in 1995, when the eager Swedish teenager began teaching himself the arcane science of drum-machines, synthesisers and sequencers, and started releasing his very first tracks, as part of techno duo Quazar. By 1999, he’d moved towards a housier sound, as evidenced by his debut solo single, Funkboy. An impressive calling card, it paved the way for a steady flow of increasingly confident underground hits, until Axwell struck crossover gold with 2004’s glorious ‘Feel The Vibe’.


An unstoppably uplifting and instantly memorable track, the original version of ‘Feel The Vibe’ (featuring vocalist Errol Reid) dazzled every corner of clubland, before an overhauled version (with new vocals by Tara McDonald) gate-crashed the UK top 20. 2005’s ‘Watch The Sunrise’ (featuring Steve Edwards) proved to be another unstoppable anthem, as was his 2006 collaboration with fellow Swedish House Mafioso Steve Angello, Supermode’s ‘Tell Me Why’ (released via Ministry Of Sound, it reach #13 in the UK and #3 in the Netherlands). But it was 2007’s rave-referencing ‘I Found U’ (#6 in the UK charts) that really cemented Axwell’s status as a producer who could marry artistic innovation with strong commercial appeal – a rare thing indeed, in any genre of music.


“I do feel pressure to maintain a certain level of success,” says Axwell. “That’s a weight that lies on my shoulders – but all that pressure comes from myself. I want every tune to be better than the last one: to sound stronger, to be phatter, to work better in a club. So it’s pressure, but it’s good pressure. It pushes me forwards, creatively.”


“For me, it’s all about asking questions of myself. Would I play this? Would I play it during peak time? Is it the phattest thing I’ve ever heard? Is it the most futuristic shit out there? I question the track – and myself – the whole time. I’ve got a good expression: the goose-bumps never lie. If you get goose-bumps during the production stage, then you’re on the right track...”


Axwell’s Midas-like touch – along with his peerless technical ability – has made him the go-to guy for artists looking to get their latest release reworked into a storming dancefloor juggernaut. Madonna, Nelly Furtado, Moby and Pharrell Williams have all come a-knockin’, while productions such as his masterful reworking of Hard-Fi’s ‘Hard To Beat’, his sublime remix of The Temper Trap’s ‘Sweet Disposition’ (along with Dirty South) and of course his unstoppable version of TV Rock’s ‘In The Air’ have gone on to become as big as – or, in many cases, bigger than – the original tracks.


Part of what makes Axwell such a sought-after producer is his dazzling stylistic agility; he can switch between house, techno and electro (and everything in-between) without even breaking a sweat.


“Axwell has an innate feel for the dancefloor,” says long-time fan Judge Jules, “but his versatility is even more impressive. Too many producers get caught in a trademark groove, becoming a prisoner of their own perceived style. Axwell’s material is so varied, but it never fails to rock – big time.”