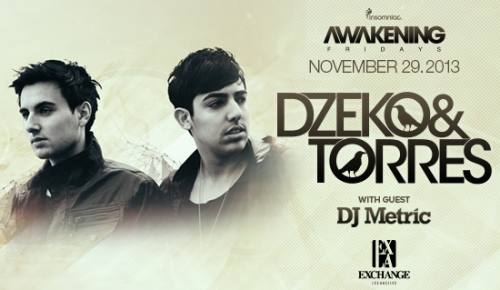 What: Awakening with Dzeko & Torres at Exchange LA

Canadian big room duo Dzeko & Torres are having the breakout year only every aspiring EDM DJ/Producer could wish to have. Smashing onto the scene in 2012 with their "Who is Ready To Jump" Remix they did for Chuckie caught the attention of DIM MAK Records head honcho Steve Aoki, asking the duo to release an EP for his label. In the early months of 2013 the duo haven’t slowed down whatsoever,  with their track with fellow Torontonians Crossways, “TOGI”, gave them their 2nd top 20 track on Beatport, and garnered over 100,000 youtube views on their debut music video. The future certainly holds a lot of promise for these two young Canadian talents, witness their skills firsthand when they play Exchange on 11.29.13!
About | Advertise | Contact | FAQs | Terms of Use | Privacy Policy © 2020 - TheUntz.com. All rights reserved.