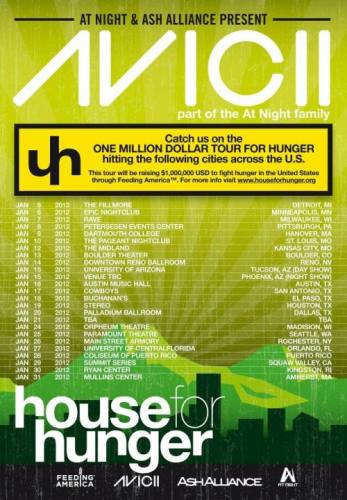 Catch us on the ONE MILLION DOLLAR TOUR FOR HUNGER across the U.S. This tour will beraising $1,000,000 to fight hunger through Feeding America. For more info visitwww.houseforhunger.org

To put it lightly,what Avicii and his manager Ash has managed to achieve in just a few years istruly astonishing. Commencing his dizzying journey at the tender age of 18, theself-taught, fresh-faced Swedish luminary has unquestionably amassed greatersuccess before turning 22 than most could ever hope to achieve in a lifetime.The mastermind behind smash hit phenomena Seek Bromance, Levels and Fade intoDarkness and chief collaborator for the chart topping My Feelings for You, hehas soared from budding bedroom music-maker to international electronicsensation in a matter of years, and already stands shoulder-to-shoulder withjust a handful of the most in-demand and elite DJs on the planet. We can onlydare to imagine what will be accomplished in a whole career…

From the off, theprodigal wiz-kid has been driven by a determination to sculpt fresh, innovativeand forward thinking electronic music. It’s what he does best. Enamored withproduction technology, and never one to get caught up in the particularities ofsub-genres and musical trends, the countless hours he spent as a youngsterimmersed in the screens, synths and keyboards of his home studio have paid seriousdividends. As he continues to deliver record after record of truly original andblissful makings, one thing has become blatantly clear for all to see – Aviciiis a man gifted with an unparalleled, innate ability to create inventiveelectronic sounds of the highest order.

In 2008, Avicii metAsh Pournouri - an introduction that proved to be the beginning of a moreprolific and creative relationship that either could have fathomed. Ash, withan ear and eye for ‘raw talent’ spotted Tim on an online portal andstraightaway instigated a meeting. He was signed to ‘At Night’ – Pounouri’sbespoke management agency – and everything fell into place. With all the rightforces now at work, a buzz began to surface and surely enough, the masses beganto fall in love – in April that same year, Avicii emerged victorious from PeteTong’s fiercely competitive ‘Fast Trax’ competition, and his first notable hitManman was subsequently signed to Pete’s ‘Bedroom Bedlam’ imprint – a heftyachievement for a mere teenager.

The partnershipbetween himself and manager Ash has flourished beyond all expectations – theunrelenting Avicii continues to masterfully hone his unique brand ofhigh-octane, melodic house music, while the successes flood in. Amongst others,it was his critically acclaimed Muja EP and smash hit Ryu (which became PeteTong’s “Essential New Tune” and Tiesto’s “Track Of The Week”) that led Aviciito even greater accomplishment, as in 2009 he was crowned “BreakthroughProducer/DJ of the Year” in DJ Magazine’s ‘Top 100’ special edition, and “TheSwedish Future” in ‘Only for DJs’ Magazine (FR). These were exciting times forthe youngster, and consistently exquisite production outputs flowed thick andfast, but it was the events of the following Summer that truly took him to thenext level as an artist, as the Swedish superstar sought a little bit ofbromance…

Released under hisalias, and quasi-namesake, ‘Tim Berg’, the triumphant phenomenon that was SeekBromance saw the plucky Swede escalated to previously unbeknownst heights andout-right superstardom, as the track became the international dance anthem forthe summer. Reaching Number 1 Beatport status after just two days, it climbedto top ten in the official national charts of ten countries across the globe –an achievement unheard-of for even the biggest of dance music megastars. Just amonth later, his smash hit collaboration with Sebastian Drums My Feelings ForYou, reached the coveted Number 1 spot once again, remaining there for anastonishing 5 weeks. By the end of summer 2010, Tim Berg, Avicii, Tim Bergling– whatever you may choose to call him – were the words on everybody’s lips anddemand soured!

Furiously jugglingmore hard work in the studio (notable underground outputs include StreetDancer, Eurhythmics’ remix Sweet Dreams, and another Sebastian Drumscollaboration Snus), a brand new radio show (Le7els), and a non-stopinternational touring schedule, there’s no question that Avicii has cementedhimself as a simply unstoppable and dynamic force. Tearing up parties at thebiggest and most prestigious superclubs across the globe, he is a performer inthe true sense of the term. You’ll also find him setting the festi-spherealight, headlining colossal events such as Tomorrowland, Ultra Music Festival, DanceValley, Street Parade and IDentity Festival, infecting hundreds of thousands ofEDM revelers with his uniquely captivating take on harmonious, pounding,stadium-driven sounds. With the competence and confidence behind the decks tomatch his beautiful production abilities, his shows are nothing short ofstunning.

If the first fewyears of unadulterated musical talent and unrivalled showmanship are anythingto go by, the rapidly growing hoards of Avicii enthusiasts are going to be infor one hell of a ride. He was inspired by the likes of Daft Punk, SteveAngello, Eric Prydz and Axwell, but the way things are going he might well justovertake them - the potential he has is second to none and unprecedented.