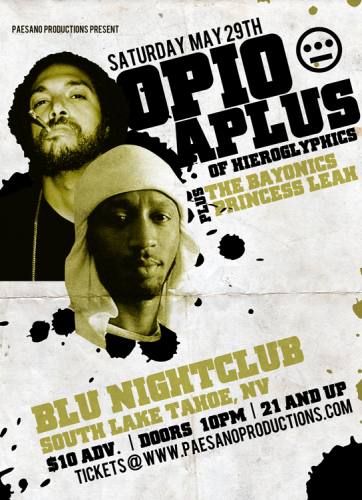 Paesano Productions Presents
'Grand Re Opening of BLU Night 2'
APLUS & OPIO (Hieroglyphics / Souls of Mischief))
special guests
THE BAYONICS & PRINCESS LEAH
plus Body Painting, $3 Energy Drinks, Exclusive Energy Girls, WNBA Cheerleaders, & more!
$10 adv / $15 door, 21+, 10:00pm
http://www.PaesanoProductions.com
- Aplus -
Born in Denver, Colorado, the son of Jamaican immigrants, A-Plus moved to Oakland, California with his family when he was 5 years old.[1] In kindergarten, A-Plus met future Hieroglyphics member, Casual, and in elementary school, met fellow Souls of Mischief member Tajai.[2] Tajai eventually introduced A-Plus to future Souls of Mischief members Phesto and Opio, and the group formed in high school before releasing their debut album, 93 'til Infinity on Jive Records in 1993.[3] After A-Plus and the Souls of Mischief were dropped by Jive, the group was incorporated into the Hieroglyphics in 1995, at the urging of Del tha Funkee Homosapien.[3] A-Plus has contributed to all four Souls of Mischief albums, as well as the two Hieroglyphic studio albums. He has also produced or performed on solo projects of various Hieroglyphics' members.
http://hieroglyphics.com/aplus
- Opio -
As a member of both Souls of Mischief and Hieroglyphics, Opio pulls double duty as both producer and MC . A self-proclaimed Child of the 70's and raised in a musical household, Opio knew early on that Hip-Hop was his love. My father was a musician I was always exposed to all different music, Classical, a lot of Jazz Reggae, Rock? Hip-Hop was just the combination of all that to me. Throughout the early eighties, he breakdanced, deejayed and emceed, fully immersed in the culture that he still loves. As a teen, Opio hooked up with local rappers Tajai and A Plus, whom he met through Casual, another MC who was Opio's classmate and neighbor. The three instantly clicked and began recording together, soon adding fourth MC Phesto Dee to form the group Souls of Mischief. Together with Del the Funky Homosapien, Casual, Domino and Pep Love, the crew Hieroglyphics was born.
http://hieroglyphics.com/opio
- The Bayonics -
New original music that bubbled up from deep within the melting pot that is the San Francisco Bay Area. Since 2001, Bayonics have been writing original songs that incorporate elements of Funk, Timba, Hip Hop, Jazz, Reggae, and Rock. With band members whose ethnic backgrounds range from Salvadorian, Peruvian, Mexican, Japanese and Samoan to Irish and African American, their compositions and performances are just as diverse as the people of the Bay Area.
http://www.Bayonics.com
- Princess Leah -
A sound unlike any other, a blend of hip hop, soul, reggae, and her own breath, combined to make something blessed. She is a warrior in the battlefield of music. In the male dominated world of hip hop Princess Leah has been able to carve out her own sound, much like a wave the ripple effects are far reaching to many distant shores. The extremely positive reaction from the people is the food that fuels mher. The story is a complex tapestry of life lessons, tears, joy and above all truth. The story is not to be read its to be heard.
http://www.myspace.com/sd2bk
About | Advertise | Contact | FAQs | Terms of Use | Privacy Policy | Accessibility Policy © 2022 - TheUntz.com. All rights reserved.