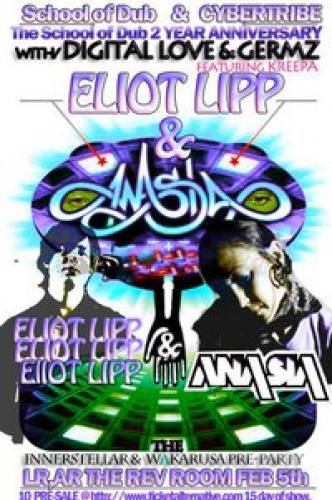 {Might as well call it the PRE-PARTY for Bassnectar in Fayetville,AR February.

...Since ANA-SIA will be blowing it up with him then & so many people seem to be going to the event from LR,AR.}

Most Importantly this is "School of Dubs TWO YEAR anniversary event"

School of Dub & all the EDM community is very happy with the growth of Dub step & how it's not just any beat,pop,are style. But, truly become

School of Dub has gone from a few dozen in attendance on a slow Wednesday night. Playing for free trying to spread Dub to the public. To now

100s of raging Dub fans & BASS IN YOUR FACE NIGHTS with each event schooling people on what Dub is all about....

Ana Sia’s love of electronic music combined with an innate understanding of the value of dance to the human soul collectively fuse to create unforgettable sets of experience, whether she is slamming spots in her hometown of San Francisco or taking her turn in the forests of music festivals around the country.

Ana Sia’s energetic delivery of brain-fazing beats has earned the Princess Slay-ah an important spot in pioneering the West Coast future sound movement. Ana Sia will take you on a musical expedition into the deepest reaches of your brain, as she masterfully blends a wide spectrum of rhythms with a beautiful fluidity and a delicate sensibility, giving the dance floor a delightful ride that ends at the corner of bliss and oblivion.

Uniting the best elements of dirty dubstep, grimy glitch, and her personalized blend of “global slut psy-hop,” Ana Sia’s sets confirm crunk status of all who dare enter into her seamless world of sound.

Since being discovered by Scott Herren (aka Prefuse 73) in the mid 2000’s, and releasing albums on the cutting edge labels Eastern Developments, Mush and Hefty as well as backing the hype with a relentless touring schedule of influential live shows all over the globe, Lipp has quickly become one of the barometers for the revival of electronic music in the States.

Day of show they will go to 15 dollars before the HEADLINERS...