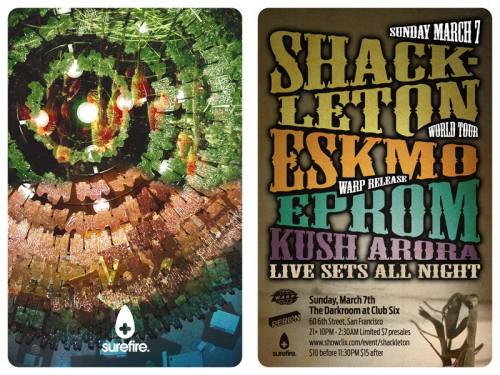 What: An Evening of LIVE Bass Music

The Dark Room
Surefire Productions Presents:
An Evening Of Live Bass Music
(No DJ’s – All Live Sets)
Featuring:
SHACKLETON (World Tour – SF Debut)
ESKMO & EPROM
(Warp Split 12" West Coast Release Party)
KUSH ARORA
On Sunday March 7th, Surefire Productions proudly presents “an evening of live bass music” featuring the SF debut of Skull Disco co-founder and dubstep pioneer Shackleton. Shackleton is supporting his debut album Three EPs, released in late 2009 on the revered Perlon imprint. Alongside Shackleton is SF’s fast rising producers Eskmo (Brendan Angelides) and EPROM (Sander Dennis) who are both making waves with their recent releases individually on Planet Mu and Surefire. Tonight they will be celebrating the release of their split 12” record “Hendt” (EPROM) b/w “Lands and Bones” Feat. Swan (Eskmo), coming out on the legendary Warp Records. Rounding out the night is the prolific SF “dread bass” producer Kush Arora, who released two critically acclaimed albums in 2009 (Dread Bass Chronicles, Boiling Over).
Shackleton’s maverick take on big bass lines and complex beats doesn’t fit easily into categories and that’s how it’s going to stay. Shackleton has been carving out his own brand of eclecticism on Skull Disco releases with intricate, snaking percussion, hypnotic melodies, seriously deep bass lines and dubwise sensibilities. His unique take on bass music makes his tunes feel right at home from a dub techno set to dubstep. There’s no wonder why The Wire magazine stated, “Shackleton’'s bass drops are huge, shoomping bolts of leaden mass - neither in tune nor out of it, they are simple…omnipresent.” Shackleton’s tunes can be found on the compilations Skull Disco Volume 1 and Skull Disco Volume 2, released in the U.S. by Rough Trade Records. SF is the last stop on Shackleton’s debut World Tour. Catch this rare performance, because it’s not often that the illusively talented artist gets out of the studio long enough to do a world tour.
Brendan Angelides is a San Francisco based electronic music producer who records and performs live as Eskmo. In the past five years he’s released over a dozen singles and EPs while touring throughout North America and Europe. Angelides also runs the Ancestor label, which issued his “Hypercolor” and “Agnus Dei” singles in 2009 to positive reviews from numerous magazines, blogs and tastemakers. Ninja Tune recording artist and film composer Amon Tobin hailed his work as “some of the best production I've heard in recent times.” Although club and radio DJs readily spin his music, Angelides always performs his Eskmo and Welder work live. His innovative, emotive on-stage performances utilize Ableton Live software with various MIDI controllers to manipulate keyboard work, effects, warping and cuing. Full bio can be found here: www.eskmo.com/bio.html
EPROM is known for his diverse, funky and energetic sets, which cross the lines between live remixing and manipulation of hiphop and dubstep with his own obscenely bass-heavy neurocrunk transmissions. EPROM has played alongside artists like Flying Lotus, The Glitch Mob, Skream, Lazer Sword, Kode9, Mochipet, Rustie, and many others. He has worked with internationally renowned MCs and has slated multiple vinyl releases in the coming year. DJ supporters include Starkey, Jakes, Bassnectar, The Glitch Mob, Rustie, Megasoid, Zombie Disco Squad, Riton, Basement Jaxx, and BBC Radio One’s Mary Anne Hobbs.
Kush Arora’s name has become synonymous with the term “dread bass.” Dread bass is the sound of a post-dancehall world where MCs are confronted with the latest in cultural-styled electronic riddims. Kush Arora has seen the dread bass sound evolve for the past ten years, and has solidified his spot in the dub community, with his signature style of Punjabi roots combined with a curious case for punk and industrial sounds. Kush is constantly collaborating with MCs and vocalists from around the world who bring a dangerous, yet insightful feel to his music.
Media Inquiries: Contact Ryan Romana at ryan@surefireagency.com