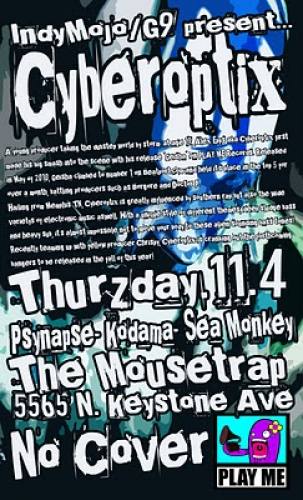 Indymojo.com and G-9 Collective are proud to bring you this VERY special edition of Altered Thurzdaze.....

A young producer taking the dubstep world by storm; at age 19, Alex Epps aka Cyberoptix first made his big smash into the scene with his release "Geisha" on PLAY ME Records. Released in May of 2010, Geisha climbed to number 1 on Beatport.com and held it's place in the top 5 for over a month, battling producers such as Borgore and Doctor P.

Hailing from Memphis TN, Cyberoptix is greatly influenced by southern rap but also the wide variety of electronic music as well. With a unique style of different themes, deep sludge bass and heavy sub, it's almost impossible not to move your body to these alien sounding bass tones!

Recently teaming up with fellow producer Chrispy, Cyberoptix is cranking out the forthcoming bangers to be released in the fall of this year! Check out Beatport for the newly released Predator track, remixed by Cyberoptix, which has already cracked the Top 100!

Listen to all of the Cyberoptix tracks and mixes here:

With local support from:

Nicknamed "Dubstep Jesus", this messiah is arguably the most prolific Dubstep DJ in Indianapolis. A Juxtapoze regular, Psynapse likes to lead his congregation through a web of dirty bass-lines and womp wobbles that can convert even the casual listener into a fan. Through natural humility and notable talent, Psynapse has certainly made a name for himself this year playing at Underground Sound, headlining festival stages at Mojostock and Oranje, not to mention the many one-offs, after parties, and monthly/weekly residencies with Indymojo/G-9 Collective, Juxtapoze (Indy), and Perpetual Entertainment (Fort Wayne). He's not one to be taken lightly.

With nearly 10 years of DJ experience, Kodama’s musical preference has touched all spectrums of electronic music. Performing under a life-long nickname, Kodama embodies the exuberant and jovial tendencies of the mythical tree spirits he shares a title with. These characteristics, paired with a healthy dabbling in many sub-genres of electronic music, come together to produce an invigorating symphony of sound.

Sea Monkey is a primarily Drum & Bass and Dubstep DJ. However, he tends to focus on the fringe elements of these genres, incorporating many styles of music that may leave listeners with a new definition of these familiar labels.