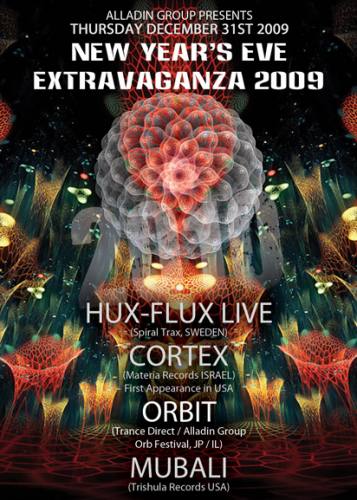 Alladin Group presents A New Year’s Eve Extravaganza 2010!
Finally, the tasty tidbits you’ve all been anticipating:
Alladin Group is pleased to announce the full details of our New Year’s Eve Extravaganza, which promises to be the most joyful of occasions!
It’s almost impossible to contain our excitement about this unbeatable super-group of knockout international guests and all our favorite homegrown performers.
We are welcoming Swedish imports to grace us both sonically and visually, for the most amazing event collaboration in NYC this year.
Be sure to arrive in time for the big midnight minute countdown, and a special NYC psy-toast to the coming year… followed by a Special fire show !
Three areas, a divine lineup, a masterful crew of visual & lighting artists, and a heated outdoors hookah lounge
RING IN THE NEW YEAR with us in the most FANTASTIC PSYchedelic celebration STYLE!
Music Performance by:
HUX-FLUX - LIVE! (Spiral Trax, SWEDEN)
Hux-Flux was born in 1998 with solo releases by Dennis Tapper, including the hit "Time Slices". Subsequently, Dennis began work with Jonas Petterson (AKA Tranan), and they produced the legendary album Cryptic Crunch together. He relocated to Stockholm, continuing collaborative work with his old friend Henric Fietz. Their partnership resulted in some killer classics, such as "Idiot", "Bring your own BIOS", and the album Division by Zero. Dennis has released multiple solo tracks since, and his recent partnered projects include "Tryptamind", together with Ibojima. Currently, he is involved in the completely new and fresh chillout/dub/ambient project "Illuminus", together with Magnus Holte. Hux-Flux has played live worldwide in several countries, including: Japan, Germany, UK, USA, Canada, Mexico, Brazil, Switzerland, South Africa, India, Israel, Morocco, Portugal, Hungary, Spain, Indonesia, Italy, Croatia, Greece, Poland, Russia, Ukraine, Australia, Romania, The Netherlands, Belgium, France, Denmark, Norway, Finland & Sweden.
MUBALI – LIVE (Trishula Records USA)
Mubali is Greg Farley, from Monterey, California. He has been writing his own music since 2003. He comes from a background of classical music (violist for 7 years) and currently makes all of his music just for fun. His tracks tend to be on the darker side of full on, and his influences are Azax Syndrom, Xenomorph, Grapes of Wrath, Absolum, Twisted System, and Digital Talk.
CORTEX (Materia Records ISRAEL) First Appearance in USA
Cortex A.k.a Assaf Weizmann (25) from south of Israel has been toying with psychedelic music since the age of 15 and releases under many different labels. He has collaborated on various tracks along-side artists such as: BrainBokka / Twisted Reaction / Kali / Safi Connection / Sidhartha / Toxical / Shake the Snake / Insane Logic / And some others that are currently in progress like Patchbay / Puzzle / also releases Remixes for G M S , Karan 3rd Eyes , Etnica , Juno Reactor / Eat Static / Infected and Many more. Assaf is a member in more two projects with the names TEMPO SHRINE & AntiMatter with Brainbokka and shake the snake from Israel. Assaf also works on the technical aspect of music and is the sound engineer in a post production studio in Israel. Very soon after 2 years work his 2nd Solo Album will release in 1/2010 More Info Soon!!!
UNWASHED TOMATO-LIVE (D-A-R-K Records, Philadelphia USA)
Unwashed Tomato is a collaborative psytrance production initiative started by Andy Aylward and David Mostoller in late 2006. Our main focus is creating an intensely psychedelic, groovy experience which is at once quirky and powerful, containing motifs from many musical traditions. Close attention is given to producing a complex yet cohesive sound while maintaining a clean and dynamic mix.
EARWORM- LIVE (3D Vision Records USA)
REALITY ENGINE -LIVE(NYC/BRAZIL) AUDIO-VISUAL FULL ON TRANCE SET
ORBIT (Trance Direct - Alladin Group - Orb Festival, JP/IL)
BRANDON ADAMS(Dreamcatcher/Caliphonic Records - NYC)
KIFE(Omnitribe, NYC)
GOATONE (Fractaltribe, Boston USA)
DUDU(Boston USA/BRAZIL)
GOS (AlterCulture Records, Baltimore, USA)
DANCING ZOMBIES (3D Productions, Orlando FL USA)
HYPNOTOAD (Light-O-Matic / PSI)
OMER BARNEA (Alladin Group, NYC)
STEVE-O (Gaian Mind, PA, San Francisco)
ROBOT EARS (Electropulse Productions/ Awake, CT)
Decoration Artist:
FUNKTION FORMS (SWEDEN)
Funktion Forms is a cutting edge visual design company providing events with a completely original and fantastic atmosphere. Using both 2D and 3D media, this team of artists creates spaces that will leaves audiences speechless. Advanced lighting techniques, in combination with various theatrical textiles, result in a look that is innovative, functional, and above all unique. The Funktion Forms vision is one of total stimulation and creativity, making the environment just as dynamic as the performances in it!
OCULAR DELIGHT (Alladin Group, NYC)
NEPHILNINE (NYC)
Alladin Deco Team (NYC)
Fire Performance By
VICTOR (NYC)
And More TBA
VJ's Artists:
SCRATCH DAVIS (NYC)
LEVITATION THEORY (CT)
EXERIS (MD)
ALCHEMISM (psyNY - NYC)
Sound & Lighting By:
AUDIOLUST (NYC)
Location:
Hello BK(formerly The Hook Club)
18 Commerce Street Brooklyn, NY
This amazing venue, with TOP NOTCH sound and an amazing vibe, will provide us with two floors of music as well as an outdoor patio. The patio will feature a heated hookah lounge offering YUMMMY traditional CHAI AND SWEETS!
*18 to enter, 21 to drink
*MUST HAVE VALID PHOTO ID TO ENTER
Direction by public transportation:
Subways:
The F train, Carroll St. stop, drops you a short 10 minute walk from The Hook.
F and G trains to Smith/9 St stop: For your convenience we will have a SHUTTLE making runs from the Smith/9 St F and G train stops to the Venue!!!!!
Shuttle:
Shuttle will run from 10pm until 3:30am, pickups at the F/G Smith/9 St stop every 25 minutes. Shuttle will be marked, look for a sign in the side window ALLADIN NEW YEARS EVE SHUTTLE.The B61 bus, which travels express from Williamsburg and downtown BK drops you off one block from the venue.
There is plenty of parking space
Bus:
The B61 bus, which travels express from Williamsburg and downtown BK drops you off one block from the venue.
Taxi fare to the venue ranges from $8 (from BK) to $12 (from downtown Manhattan).
See you soon
LOVE & LIGHT
Alladin crew