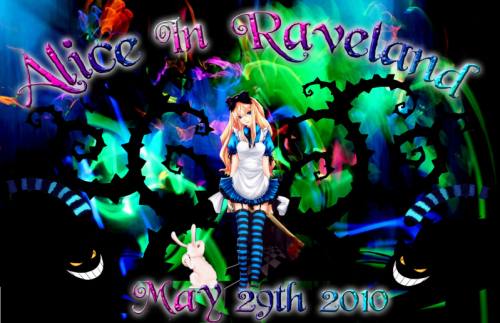 Voxx Events and Promotions presents:
Alice In Raveland
- Headlining: David Garcia (Solmatic) -
DAVID GARCIA was born in Caracas, Venezuela; He grew up in Los Angeles then transplanted to the San Francisco Bay Area. Having lived in these parts of the world filled his life with different flavors, a 'mash-up' of cultures and musical influences helped shape his style. In San Francisco is where he kicked off his music career holding down residencies at some of San Francisco's biggest nightclubs and working for the top radio stations as a host and producer of 2 very influential underground music shows: "House Nation" and "Radioactive". With this success, he developed the reputation as one of the most versatile voices of the San Francisco scene. In early 2000, he decided to expand his entourage and create his own label imprint SOLMATIC Records, during which time he also immersed himself into the studio, shaping his own sound. Confirming Garcia's talent as a Producer/Remixer was the amount of Chart & play list support he received from global djs. He has also remixes tracks for the likes of Korn, Nelly Furtado, Ashlee Simpson, Carina Round and many others. In 2003, he changed zip codes & headed south to Los Angeles, where he partnered up with fellow (DJ/Remixer/Producer) Richard Vission who is now taking part in pushing SOLMATIC to a whole new level. Currently he continues to tour (USA & internationally), produce/remix and collaborate, with more enthusiasm than he has ever had before, knowing this is just the beginning... ?... and now Voxx is lucky to be a part of it!
-DJ Slik Willy (Voxx/Optimal Ent.) Vs DJ Tabby (Starcatchers) -
DJ Slik Willy is a new DJ to the NW rave scene. Moved over here last year from Massachusetts where he began his DJing career with Optimal Entertainment. His talents and ear for great house, trance, and breaks is what got our attention here at Voxx HQ. We feel priveledged have him a part of our crew. He has become an integral part of the crew, and we love his music.
Tabby and Starcatchers is a good friend and one of our first allies in this scene. Tabby and DJ Slik Willy both have similar taste in music and have tossed the idea around of VSing before, so now's their chance and we all get to hear it live!
- Phreek D (Phatwire) -
Phreek D's journey began in '93 after going to his first party and over the next few years really fell in love with the vibe of making people dance. After a couple years watching his favorite DJs like Doc Martin, Terry Mullin, Derrick Carter and a few other he finally got his own decks and started spinning in '97 and that is where it all began to build. By '99 Phreek D started playing regular local shows openning and closeing for many top notch Northwest DJs and had residency at 2 of Portlands underground afterhours clubs (The Studio & The State) '99 thru '01. After playing show til '02 Phreek D decided to take a break to pursue learning the trade of event productions mainly in the rock-n-roll biz. Getting to work with some of the top Bands in the world and seeing how and what it takes to throw an event Phreek D knew he wanted to do more than just DJ put to throw top quality shows. When givin the chance to DJ on the Dew Action Sport Tour in '07 Phreek D quickly regained his love for moving a dance floor and knew he wanted to DJ for a large show again.
Now it has been more than 2 years since Phreek D teamed up with one of his old partners 3 Peace from Funkside Family to throw their first show in early '08 called "Love Spell" with Lea Luna as the headliner. In the last 2 years it as been non stop for Phreek D bangin out the Fidget House at show after show. After a 5 year retirement Phreek D has built a fan base with the new school party kids faster than any Northwest DJ has ever done. Playing most of Ground Breaking Events shows for the last 2 years like "Rave to tha Grave","Together","Big Bang Theory 2","Green","Utopia 3","School Of Hard Beats","Rave to tha Grave 2" & "Nintechno 2" and headling couple other shows form other Promoters. Now Phreek D has turned it up a notch by teaming up with Phatwire Entertainment to throw there very first party "Nightmare after Valentines" w/ Quack Quack from SLC and it was a huge success. Setting his sights forward Phreek D is now about to venture into producing tracks and working on sharing his grove to the World!
Dee Jay 3 Peace (G.B.E.)
Big Daddy Scamp
DJ Mac (Voxx) Vs DJ Remy (Voxx)
DJ Gitdown (Phatwire/Legacy)
VO1D (Voxx)
DJ Text Me (Voxx)
Virtue Villain (Voxx)
Alex Voren (Baseblitz)
A.D.H DJ
Zymurgy
M. Lord
- TA Event Center (300 Mon- New +1400 capacity venue across, 2 Rooms (18+ 1000+ capacity main room with juice bar, 21+ 450+ capacity second room with full bar) This venue is LITERALLY RIGHT NEXT TO THE MAX STOP. Get off at the Convention Center Max stop and you will be right in front of the TA Event Center.
- Heart resetting sound
- Trip inducing lights and lasers!
- Live Painters - Art Mob will be showing off their skills live. More than just their paintings, they put on a show!
- UPDATE!!!
WE ARE DOING A COSTUME CONTEST! BEST COSTUME GETS $150 CASH. MUST BE ALICE IN RAVELAND THEMED. For more info please e-mail voxxpromotions@gmail.com or call our info line 310.894.6816
Pre-sale tickets available while they last at - http://www.brownpapertickets.com/event/110564
For more info in the meantime about the event, venue, DJs, lighting, sound, and other event information contact us at voxxpromotions@gmail.com
About | Advertise | Contact | FAQs | Terms of Use | Privacy Policy | Accessibility Policy © 2022 - TheUntz.com. All rights reserved.