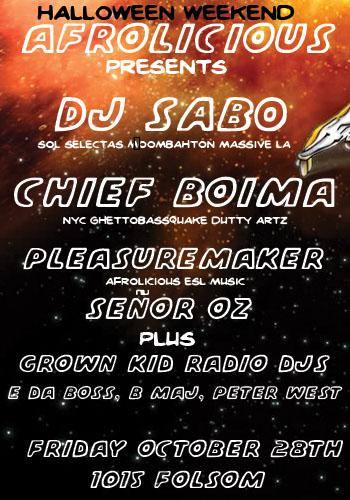 
Friday October 28th at 1015 Folsom we are excited to have DJ Sabo (LA/Moombahton Massive) and DJ Chief Boima (NYC/Dutty Artz) on the same bill as the Afrolicious djs Pleasuremaker and Señor Oz. In the second room we have the Grown Kids Radio crew holding down the eclectic sounds. It's also Halloween weekend, so dress up if ya want, dress to get down and have an epic night.


SABO is a Dj internationally known for the last 14 years for his signature "funky music to make you feel good" style, which is a rhythmic combination of House, Latin, Brazilian, Afrobeat, Disco, Reggae, Cumbia, Dub, Miami Bass, Hip Hop, and Tropical Bass.


A global citizen with a globally minded focus, Chief Boima is an electronic musician/DJ, cultural activist, and writer currently based in New York. He is a member of the Brooklyn based music, arts, and culture collective, Dutty Artz. He also has contributed to various music and culture online and print publications such as Ghetto Bassquake, Africa is a Country, WFMU Radio, and The Fader Magazine.


Afrolicious is San Francisco based collective who perform live with a ten piece band and also as a dj duo with live percussionists and MCs.


Afrolicious remixes and original productions can be found on labels such as ESL Music, Six Degrees Records, Akwaaba Music, Bagpak Music and more.


Eclectic, thoughtful and early-adopters are some words that come to mind when Grown Kids Radio is present. Comprised of several San Francisco-based, forward-thinking creatives, this crew has conjured a unique recipe for the freshest of musical stews each serving as an audio entree. B Maj, Spinnerty, Diversify, Cyclyst, Peter West, and EricBoss all bring forth their own niche to the show, riding the soundwaves of all forms of music, from every imaginable step of life. With over 31 episodes in the bag and features from Chico Mann, Mono/Poly, Natural Self, Dibiase, Grillade, Jay Scarlett, Maus Haus, and Jeremy Ellis to name a few, the kids are officially Grown!
About | Advertise | Contact | FAQs | Terms of Use | Privacy Policy | Accessibility Policy © 2023 - TheUntz.com. All rights reserved.