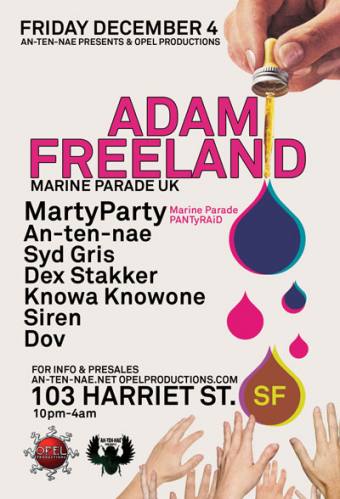 Opel & An*ten*nae present Adam Freeland (Marine parade / UK). Mr. Freeland's range has grown each year as he's continued to impress with his ability to rock you in a myriad of ways. His full length artist album Cope he released with his Freeland Live project continues to give him momentum and his sound refuses to be pigeon holed into genre except to know that it rocks.
This show will also feature fellow Marine Parade label artist Marty Party from Panty Raid bringing a mid-tempo vibe of glitch, dubstep and crunk. Main room support as well from Syd Gris & Dex Stakker. Front room will be all proper midtempo throb with An-ten-nae, Dov, Siren, and Knowa Knowone.
About | Advertise | Contact | FAQs | Terms of Use | Privacy Policy | Accessibility Policy © 2022 - TheUntz.com. All rights reserved.